To share your memory on the wall of Leonard Thompson, sign in using one of the following options:

Print
Funeral Service for Leonard Thompson, 102, of Dickinson, formerly of Regent, will be at 1:00 p.m., Friday, October 2, 2020, at Stevenson Funeral Home, Dickinson. Visitation for Leonard will be one hour prior to the service.

Leonard's fam... Read More
Funeral Service for Leonard Thompson, 102, of Dickinson, formerly of Regent, will be at 1:00 p.m., Friday, October 2, 2020, at Stevenson Funeral Home, Dickinson. Visitation for Leonard will be one hour prior to the service.

Leonard's family requests that all present for the service wear masks and social distance according to the Department of Health and CDC's recommendation.

Leonard Thompson was born in a sod house on May 2, 1918, in Chandler Township in northern Adams County. His parents were Thomas and Iva Ree (Bratcher) Thompson and he was the youngest with five sisters, Elsie, Florence, Eleanor, Thelma and Alice. After attending schools in Chandler, Pleasant Valley and Timber Creek country schools, he graduated from Mott Lincoln High School in 1935. Leonard married Marie Witte on September 13, 1941. He was drafted into the US Army in July 1942. However a ruptured appendix delayed his reporting for duty for several months. After basic training he became a mechanic in a caterpillar factory in Peoria, Illinois, before moving onto Virginia and Maine. When he got home in July 1943, his daughter, Joyce, had just been born but he was only allowed ten days to be with his family. Leonard went on to see the world with the help of the government as he was serving our country during World War II and Franklin D. Roosevelt was the President. Leonard went to Maine, New York, and took a cruise to Rio de Janeiro, Brazil that only took 42 days. He went on almost to Antarctica, then to Bombay, India. A train trip to Calcutta lasted ten days. From there he got on a barge and up a river in India. The roads were primitive and mostly mud tracks but it took him all day to drive a 4x4 truck for 72 miles. The 180 men camped in the jingle with some sleeping in hammocks. He had to clear a spot for a tent with a dozer. Whenever the dozer broke down he had to fix it as he was the mechanic but there was very little diesel fuel available to run it. Food was not very tasty. They had some corned beef from Australia and Argentina. “If you added hot pepper to it, then it was possible to eat it,’ he said. They also had dehydrated eggs and potatoes and tea but he had no coffee for about 18 months. They were in Burma when they heard the war was over. They were excited and shot all their ammunition into the air. They dug holes to bury equipment as it was too expensive to ship home. Some were put in piles and the Air Force blew them up. A D-8 caterpillar cost $8000 but $25000 to get over there. They had D-8s, D-7s, D-6s and D-4s which had been shipped in big boxes but nobody knew what happened to the boxes as they would have made nice shelters against the bugs, critters and elements. Leonard finally got home to his wife and two-year-old daughter just in time for Christmas in 1945. He had served a three year duty with two and half years of that overseas. The only communication with home was V-Mail. Letters were reduced in size and no stamps were needed even though first-class stamps were only three cents. The men couldn’t tell anybody at home what country they were in or what they were doing. He earned the Asiatic Theatre Medal, North American Theatre Medal, a Victory Medal plus some others he didn’t get but they didn’t concern him. Leonard and Marie bought a farm northwest of Regent. They started farming, milking cows and sold milk and cream. They tried raising chickens but skunks were a problem in the area and he can tell you numerous stories about experiences with them. Leonard was active in the community. He served on various boards, such as the Black Butte Township Board, the Hettinger County ASCS board and served as supervisor for nine years and the Regent Public School Board for nine years. Marie taught in country schools and was the librarian in Regent Public School. She also played the organ in their nearby Zion Lutheran Church. The couple had three daughters, Joyce, Joan and Ruth who all graduated from Regent High School. Marie passed away in August of 2006 on her 90th birthday. That fall Joyce and her husband Gerald Richardson, left their home in Seattle, WA to move into the family home on the farm. Leonard moved into a double-wide trailer in the same yard which gave them all companionship with privacy and help if needed. Gerald passed away in 2010 but Joyce remained in the house to assist her father as needed. In May 2009, Leonard and Joyce participated in the Roughrider Honor Flight in Washington, DC for World War II veterans where they toured historic sites around the city and renewed memories and exchanged stories with other veterans. After he broke his leg in an October fall in his home, he entered St. Benedict’s Health Center where he currently resided. After a 102 years of a humble beginning, he loved to visit, had a quick wit and his memory was sharp while his eyesight and hearing were not so good. What has he seen in 102 years? Some include the changes in cars, airplanes, modes of travel, electricity, phones, newspapers, magazines, politics, entertainment, activities, farming techniques, smaller families leaving the countryside and the rural way of life for the city and steady jobs.

To send flowers to the family or plant a tree in memory of Leonard Thompson, please visit our Heartfelt Sympathies Store.

Receive notifications about information and event scheduling for Leonard

We encourage you to share your most beloved memories of Leonard here, so that the family and other loved ones can always see it. You can upload cherished photographs, or share your favorite stories, and can even comment on those shared by others.

Love, the Sarlattes, Love, Rachel Dave, Abby, and Riley, and other have sent flowers to the family of Leonard Thompson.
Show you care by sending flowers

Posted Sep 30, 2020 at 12:00pm
With loving memories of Leonard Thompson, and with deepest sympathy. Wayne and Ruth Hartman, Lynn Hartman, Mitch and Kelley Hartman and family.

3 trees were planted in the memory of Leonard Thompson

Posted Oct 02, 2020 at 04:07pm
Leonard was a friend and customer. He could tell a good story. He loved to visit - as did Marie. He was a good singer and could hold a pitch singing into my guitar tuner!!! He was always reading a good book, a newspaper or something. He had a wealth of general knowledge about the world and could hold his own in a game of Trivia. He was good for a crossword puzzle answer as well! I am sad that I couldn't visit with him these last 6 months ! I know that Jesus has welcomed him home. He always said, “Do you have to leave?” My condolences to his “girls”!
Comment Share
Share via:
J

Love, the Sarlattes purchased flowers for the family of Leonard Thompson. Send Flowers

Posted Oct 01, 2020 at 09:54am
Sending lots of love and comforting prayers! Grandpa Sweetie gave me, and all of us, incredible memories. 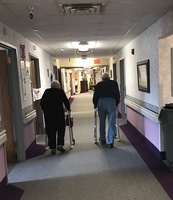 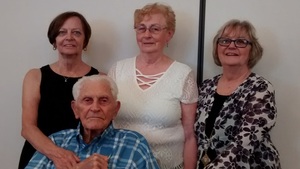 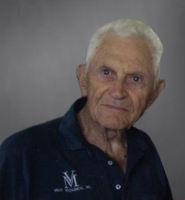 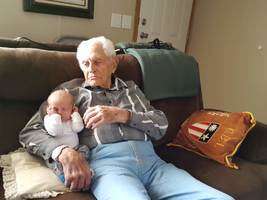