To share your memory on the wall of Ruth Buzalsky, sign in using one of the following options:

Print
On Friday, July 31, 2020, Ruth Buzalsky (nee Rocksvold), loving wife and mother of five children, passed away at St. Luke’s Nursing Home surrounded by her family at the age of 93.

On January 26, 1927, Ruth was born on her parent’s farm on the Red River near Drayton, ND to Albert and Catherine Rocksvold. Due to a shortage of teachers during WWII, she volunteered to move from her home in the Red River Valley first to Minnesota then to the Badlands in the most South-West part of North Dakota. There she met her future husband, Gilbert Buzalsky, and after his return from Korea, they married on August 20, 1952. They raised two sons, Douglas and Ronald, and three daughters, Jawayne, Pamela, and Nancy.

Ruth had a creative passion for sewing, knitting, quilting, and service to others. She used her skills, extraordinary talent, and love to create linens, quilts, and clothing for her family and friends. Her passion for artisan craftwork was passed down to all her children through sewing, writing, quilting, and knitting. Friends and family greatly admired her for her dedication to her local community. She was always an active member of her local church and the many local volunteer service chapters from the American Legion to the Senior Citizens club. She was also known for her skill in bowling, competing at the national tournament, and quickly solving any word puzzle, her passion for life, and her kindness.

She is survived by her husband, Gilbert, her five children and ten grandchildren. She will be buried at the North Dakota Veterans Cemetery in Mandan, ND, and a memorial mass will be held at a later date at St. Mary’s Catholic Church in New England, ND.

In lieu of flowers, the family suggests memorials be given to New England Senior Citizens, St. Mary’s Catholic Church, or St. Peter and Paul Cemetery in Amidon.
Read Less

To plant a memorial tree in honor of Ruth Buzalsky, please visit our Heartfelt Sympathies Store.

Receive notifications about information and event scheduling for Ruth

There are no events scheduled. You can still show your support by sending flowers directly to the family, or planting a memorial tree in memory of Ruth Buzalsky.
Plant a Tree

We encourage you to share your most beloved memories of Ruth here, so that the family and other loved ones can always see it. You can upload cherished photographs, or share your favorite stories, and can even comment on those shared by others.

This is a poem about Ruth Buzalsky,
She is the Mom of Jawayne, Doug, Pam, Ron, and Nancy.

God made a decision from Heaven,
That Ruth Ann Rocksvold joined the earth in 1927.

Ruth is known as being a giver,
Whose birth took place in North Dakota near the Red River.

The 8th child of a Norwegian man,
Red haired Catherine was his spouse and mother of Ruth Ann.

During the depression and the land became a dust bowl,
River floods, scarlet fever, and withered crops took their toll.

Scarlet fever took the life of her brother Benard,
A young man taken young who people held in high regard.

Ruth played baseball with a straight face,
She tagged her opponents out on first base.

She hung out with her brother Ray,
They were two of a kind the locals would say.

Ruth Ann graduated in 1944,
The world was at War and causing utter horror.

Soldiers wrote to Ruth on a regular basis,
Boys from the front searching for love thought Ruth was their oasis.

Magic happened when teaching school in Bowman,
Tall handsome Gilbert was the man who turned the head of Ruth Ann.

Short in stature when standing up at 5’3”,
The man she would marry towered over her at 6’3”.

Amidon was where the Buzalskys’ established their roots,
It is close the highest point in North Dakota in the Chalky Buttes.

Raising the 5 was in two separate batches,
Ron and Nancy were the last of the egg hatches.

Her children called her simply ma,
Her favorite phrase was wouldn’t that frost ya.


The phone in Amidon was a party line,
Grandma Grange listened to the towns conversations every time.

Mom made all the clothes that we wore,
The candy was bought at Bud’s grocery store.

Board of of education was her spanking stick,
It instantly changed our behavior and the lickin did the trick.

The big move happened in 1977,
New England looked like a slice of pure heaven.

Ruth worked in the Bakery at the Super Value grocery store,
Using her skills and cake decorating, pies, candies and so much more.

With skill she bowled in not one league but 4,
With the crack of falling pins she racked up a high score.

Farmers Union insurance Gilbert ran,
As his secretary, she slept with her boss man.

For 30 years they had children in the house,
When Nancy graduated the silence was as quiet as a mouse.

Ruth was active in the auxiliary of the American legion,
Because Gilbert had served in the Army and was commander of that region.

Mom helped build the local library,
A welcome place to study and read on the prairie.

Ruth was known locally as the favorite tailor,
Making all the underwear for the Buzalsky girls without failure.

Need a costume or curtains or anything to sew?
Ruth was the gal and her notoriety would grow.

Ruth was very sick in 2004,
Having an ostomy bag and so much more.

The Medical issues were not very sunny,
But she kept going just like the energizer bunny.

The move to Dickinson was a difficult decision,
A fabulous retirement life was Gilbert and Ruth’s big vision.

Ruth has had an incredible life,
For 68 years a companion to Gilbert and a faithful wife. 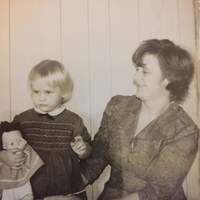