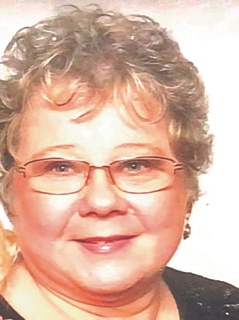 Funeral Services for Adel Beach will be 11:00 am, May 14, 2022 at American Lutheran Church. Burial will follow at Bonnievale Cemetery in Baker, MT.

Adel Beach of Laurel, formerly of Baker, MT, went to be with her Lord and savior April 18, 2022 after a courageous battle with cancer. Adel Marie (Mische) Beach was born in Dickinson, ND on Dec. 30, 1954, to Reinhold and Rose Mary (Dolajack) Mische.

She attended schools in Buffalo, WY; Glendive, MT; and had most of her schooling in the Baker Public Schools. She graduated from Baker High School in 1973. While going to high school, she worked at the Big K Drive-in for Herb and Lonnie Ketterling. After graduation, she enrolled at Miles Community College in Miles City, MT. After college she began working at Baker Super Value.

On July 6, 1974, she married Donald Beach at the American Lutheran Church in Baker. She and Don moved to Havre, where Don attended Northern Montana College. While there, Adel worked at Northern Montana Hospital as a cook, diet aide and then in purchasing. In 1979, they moved to Billings, and in March of 1980, Adel began working at Albertson’s as a cashier for 25 years. She then began working in the floral department, continuing to work another ten years doing what she loved most - designing floral arrangements. She retired from Albertsons in 2015 but kept on designing flowers for friends and family!

Don and Adel were delighted to add two children to their family, a daughter, Mischele and a son Gregory. In 1986, they moved to Laurel where they made their home and raised their family.

From an early age, Adel appreciated creativity and artistry. She enjoyed growing houseplants, painting, crafting, flower gardening, home interior design, decorating for the holidays, and of course, designing stunning one of a kind fresh and silk floral arrangements. Her love of art and design carried over to her love for jewelry and throughout the years she collected many beautiful pieces. She loved shopping and going to the movies with her friends. She was a member of American Lutheran Church in Baker and later became a member of The Rock Church in Laurel. Adel was a loyal friend, staying in touch with her high school friends and co-workers.

To order memorial trees or send flowers to the family in memory of Adel Beach, please visit our flower store.