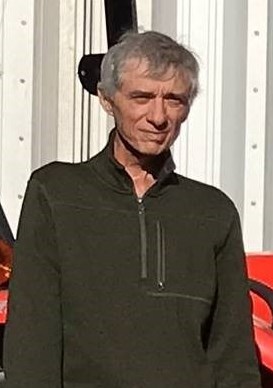 Liturgy of the Word for Alvin Robert Volesky, 69, of Lakehills, Texas, formerly of Dickinson, will be 11:00 a.m., Monday, June 20, 2022 at Stevenson Funeral Home in Dickinson with Deacon Dallas Carlson officiating.

Alvin passed away peacefully in his sleep at his home in Texas on June 1, 2022, after an extended illness.

Al was born on December 18, 1952 to Robert and Otillia (Bob and Tillie) Volesky in Dickinson, North Dakota. He grew up on the family dairy farm near Dickinson where he learned how to work hard, play hard, love family, and have faith in God.  He was the third of seven children born to Bob and Tillie.

He joined the Air Force and served during the Viet Nam War as a Morse code analyst in Taiwan.  His career in software development, software management, and data warehousing spanned 30+ years.  He also owned a digital printing company before retiring to Morning Hill Ranch to raise goats.

He married Dawn in 1991 in San Antonio where they formed a family with their children: Stacey Elstun, Jennifer Volesky, Tom Hollick, and Crystal Siller. He had seven grandchildren.  Stacey and Chad Elstun have 3 grown children: Devin, Katelyn, and Ethan.  Tom and Jenny Hollick have 1 daughter, Tenley.  Crystal & Trevor Siller have 3 children: Makenna, Jace, and Addison.

Before becoming ill, Al excelled in any sport he tried.  His favorites were basketball, which he played in high school and in the Air Force, and golf.  Throughout his life, he loved watching his kids and grandkids in their sports, whether in-person or watching live-streamed events during COVID.  He remained a kind, intelligent, capable man despite the limitations his condition presented.  Dawn, his children, his family, and his friends will miss him terribly.

Al was predeceased by his father, Bob. He is survived by his wife Dawn and their 4 children and seven grandchildren.  He is also survived by his mother, 2 sisters (Roberta and Karla), 4 brothers(Fritz, Kevin, Ken, and Keith), many in-laws, nieces, nephews and cousins.

A Celebration of Life service was held in San Antonio on June 13th at Oak Hills Church. In addition, a memorial services will be held at Stevenson Funeral Home in Dickinson, ND,  June 20th at 11:00 AM. In lieu of flowers, the family requests donations are made to Save Medina Lake/Lake Medina Conservation Society (http://www.savemedinalake.com/-donate-.html) an organization Al and Dawn felt strongly about.

To order memorial trees or send flowers to the family in memory of Alvin Volesky, please visit our flower store.