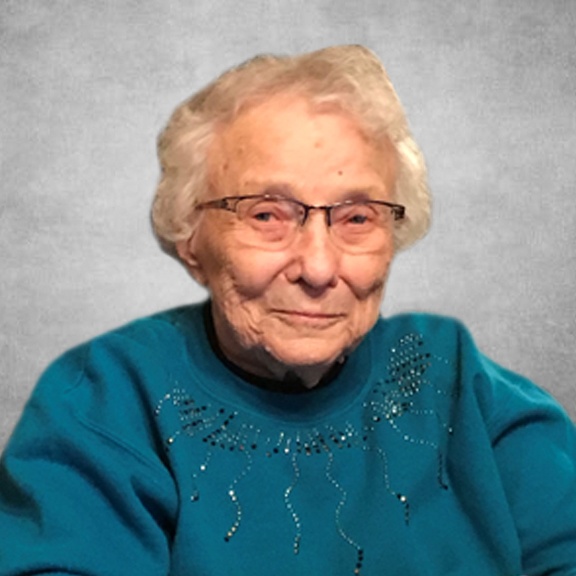 A funeral Mass for Anne Privratsky, 100, of Dickinson, formerly of South Heart, will be at 2:00 p.m., Friday, February 5, 2021 at Queen of Peace Catholic Church in Dickinson with Monsignor Thomas Richter celebrating. Burial will follow at St. Mary Catholic cemetery, South Heart.

For those attending, please follow recommendations from the CDC and ND Department of Health. If you are unable to attend, you may view the live webcast of Anne’s services. Go to the Stevenson Funeral Home website, click on Anne’s photo, select photos and videos and click watch webcast.

Anne passed away Thursday, January 28, 2021 at Hawks Point in Dickinson.

Anne Privratsky was born on Christmas Eve in 1920, the 4th of nine daughters to Louis and Katherine (Bren) Binstock. She told stories of growing up in a one bedroom house, working outside with her dad and being a housekeeper/nanny during the summer months starting at the age of 10. Anne met Albert when her older sister was dating Albert’s brother. They married on November 21, 1939 in St Peter and Paul Catholic Church in New Hradec. Together they farmed and ranched on the family homestead south of South Heart. They were blessed with seven children, which blessed them with daughters/sons-in-law which they loved as their own. Anne and Albert enjoyed family trips in their RV, sitting around the campfire at the lake, and trying to teach their youngest adult children and families how to speak Bohemian which always brought tears of laughter.

Family gatherings were very important to her, spending many hours preparing family meals until late in life. At family potlucks, we couldn’t wait to savor her famous potato salad and raised potato doughnuts.
She was a gamer at heart, with whist being her favorite, and she played to win with that little smirk as her cards fell into place. Her laughter filled the room when each hand ended. Anne always enjoyed trips to Prairie Nights Casino and Four Bears Casino.

Anne moved to Dickinson in 2008 after Albert passed away in 2006. She would shovel snow from her driveway and mow her lawn at age 90. She had a green thumb like no other; she would enter a greenhouse to ‘just look’ but usually came out with another plant/flower. Her peonies and lilies were her favorites. She collected porcelain dolls with her favorite being the ‘Blushing Bride’ from Albert.

She moved into Hawks Point Assisted Living in May 2016. At age 96, she learned to use an iPad to play her casino games and Spider Solitaire, and FaceTime with her family. She often had a word find or Sudoku in her hand.

In lieu of flowers, the family requests memorials be made to Dickinson Catholic Schools.
To order memorial trees or send flowers to the family in memory of Anne Privratsky, please visit our flower store.