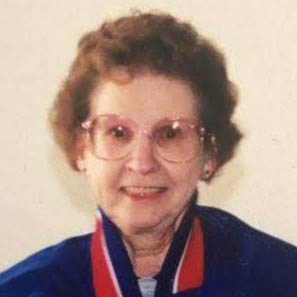 Funeral services for Areatha Penn, 89, of Ekalaka, will be 2:00 pm, Wednesday, May 15, 2019 at Stevenson Funeral Home in Ekalaka with Pastor Scott Kiehn officiating. Burial will follow at Beaverlodge Cemetery.


Areatha went to be with her Lord on May 10, 2019, at Dahl Memorial Healthcare after a long illness.


She came into this world on July 15, 1929 in Ekalaka, the 3
rd
child of six born to Herbert and Sylvia McCamish.  Areatha went to grade school across from Box Elder Creek, often riding horse back to and from school.  She graduated from Carter County High School in 1947, and one of her first jobs was at First National Bank in Ekalaka.  On August 15, 1950, she married the love of her life, Leroy (Bud) Penn.  After starting her family, she worked at the Carter County Treasurer’s office as both Deputy Treasurer and Treasurer.  She and Viola Stenseth switched positions every four years which was required at that time.  She made her last career change by going back to First National Bank of Ekalaka where she worked for 20 years, attaining the position of loan officer, a great accomplishment for a woman at that time.  It was during her time at First National (1970) that Bud had a career ending heart attack. So, from that time on until her retirement in 1992, she was the sole breadwinner for the family.


Bud and Areatha had three children: Ken, Casey, and Kelly.  Casey passed away at the age of 2 from congenital heart disease.  Bud passed away on May 11, 1998 from complications of the heart attack he experienced back in 1970.


Areatha was an avid supporter of her community throughout her life—especially our local schools.  She was usually at the top of the sponsor list of supporters in the Ekalaka Eagle for upcoming sporting or other school events.


She was especially fond of her family and grandkids.  At one event with the family, one of her great grandsons asked who she was.  He was told she is “Grandma Great.”  He misunderstood and thought she was called “Grandma Grapes.”  From then on, she was known as Grandma Grapes or “G2” to all the grandkids.


Areatha is survived by her two children:  Ken and Kelly and their spouses, Kay Penn and Mike Padgett; Ken and Kay’s three children, Krista (Justin Jassmann) and their children, Samantha, Micah, Tyler, Hannah, and Ethan of Becker, MN and Somerset, WI., Klint (Brandy) Penn and their four children, Sawyer, Austin, Teagen, and Layken of Dickinson, ND, and son, Kyle Penn, of Williston, ND.; Kelly (Mike) Padgett and their two children, Jon and his daughter, Brinley all of Minot, ND, and Julie Pollock and her children, Kieran, Bridgid, Willem, and Eireann of Torrington, CT.  In addition, she is survived by her three remaining siblings, Herb (Georgetta) McCamish of Spearfish, SD, Tom (Mary) McCamish of rural Ekalaka, and Rose Ann (Bill) Harfst of Aurora, CO and Marlin Sorenson, brother-in-law of Bismarck, ND and numerous nieces and nephews.


She was especially blessed to have the caring staff at Dahl Memorial these past three years and Terry Stieg who faithfully delivered her Meals on Wheels at the Manor and all of her mail to Dahl Memorial.


For those wishing to give memorials, please consider Dahl Memorial Healthcare as they became her second family.

Funeral Service: 2:00 p.m. Wednesday, May 15, 2019 at Stevenson Funeral Home in Ekalaka
Visitation: 12:00 p.m. to 2:00 p.m. at the funeral home on Wednesday, May 15
To order memorial trees or send flowers to the family in memory of Areatha Penn, please visit our flower store.