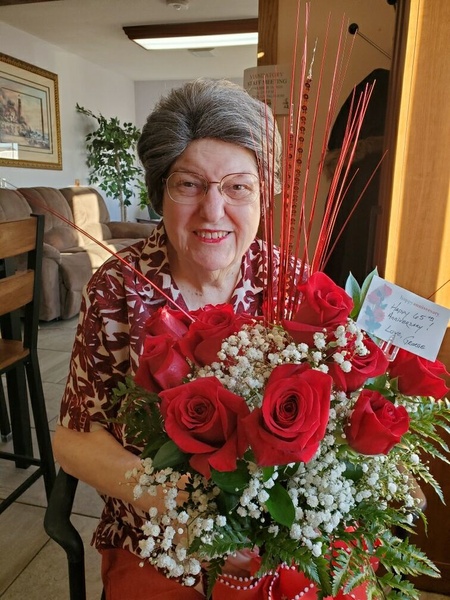 Funeral services for Barbara Olind, 83, of Baker, will be Friday, September 24, 2021 11:00 a.m. with Don Buerkle and Robin Menger officiating at Stevenson Funeral Home Baker. Burial to follow at Bonnievale Cemetery in Baker, Montana.

For those not able to attend the service it will be live streamed from Stevenson Funeral Home website.

Barbara Lee (Polson) Olind was welcomed into Heaven in the late hours of September 15, 2021 due to Covid, Barb was comforted by a caring and compassionate RN, Ruthie.

She was born May 16, 1938 in the area of Soap Creek near Saint Xavier Montana to Clarence and Peggy Polson the first of their four children. They lived in and around the Saint Xavier area until later purchasing the Rice Café, changing it to Peg’s Café to enable Barbara to attend school in Saint Xavier and later in Hardin.
She married George E. Olind Nov 12, 1955 in Saint John’s Lutheran Church Saint Xavier, Montana. As newlyweds they began their life together working on the Archie Wilson Ranch near Fort Smith Montana. Later they moved to Camp 4 of the Campbell Farming Corporation living there and raising their 3 oldest children. Later they moved to the Two Leggin area near Hardin where they welcomed their youngest, Wendy. In the fall of 1974 they moved to Baker Montana.

Barbara enjoyed her roles as wife, mother, and homemaker taking on different jobs while raising her children. Barbara received her Dietary Managers Certificate from the University of North Dakota. She managed the dietary department for 25 years at Fallon Memorial Hospital. She took great pride in the food that was prepared and served there. She was honored to be appointed to the Governor’s Council for Developmentally Disabled Individuals serving several years. Barbara loved to travel and a chance conversation opened a door for her to new adventures. She loved planning trips, cruises, and bus tours for a number of years with Action Travel and later Satrom Travel. Barbara enjoyed, cooking, baking, arts, and crafts.