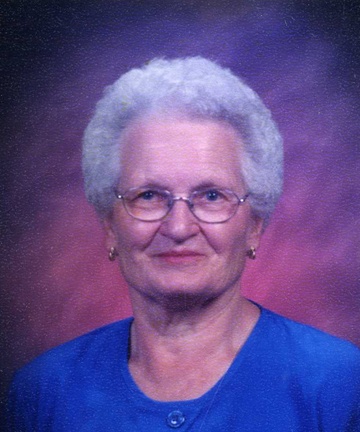 Funeral Mass for Beata Havelka, 91, of New Hradec, will be 10:00 a.m. Monday, July 12, 2021 at Sts. Peter and Paul Catholic Church in New Hradec, ND. Father Shane Campbell will celebrate the mass. Burial will follow at the church cemetery.

Beata died on July 8, 2021 in the loving care of staff at Miller Pointe, Mandan, with her family at her side.

Beata was born at home along with her twin sister, Beatrice, on March 3, 1930 to Louis F. and Rose (Jilek) Sadowsky. She grew up on her parents’ farm in Dunn County and attended school through the 8th grade at Sts. Peter & Paul in New Hradec ND. She married George Havelka on November 11, 1953 at New Hradec. After their marriage, they moved to a farm near New Hradec in Stark County. She was a member of the Sts. Peter & Paul Altar Society, Catholic Workman Fraternity, Ladies Homemakers Club, and lifelong member of Sts. Peter & Paul Catholic Church. Daily prayer and her Catholic faith were her foundation.

Bea’s hobbies included crocheting, embroidery, sewing, baking bread & kolaches, making noodles, canning, playing cards and scrabble, and gardening. She especially loved flowers. A visit was not complete without a stroll through the flower garden. She knew many helpful time-saving tips when working in the kitchen. She prided herself on having clean, white, crisp clothes and every Monday was clothes washing day. She always had homemade treats to snack on and most everyone likely left with a sugar high. She loved ice cream. She enjoyed Christmastime and decorating the tree by herself. She loved listening and singing to old time music – polkas and waltzes and a nightly shot of peppermint schnapps. She enjoyed going on trips for many years.

She was only 58 when her husband, George, died. Loneliness was her nemesis for many years after that. She learned to drive with the help of a neighbor and regained her sense of independence while she remained on the farm. Later, her years at Evergreen in Dickinson brought her comfort – being around people. She enjoyed participating in all of the activities, bingo being her favorite. She never did understand the lockdown of COVID and inability of being with family while convalescing after hip surgery. She took comfort in the care given to her by the staff at Baptist Care Center Bismarck and Miller Pointe during her final days.

Whenever it was time to say goodbye, she would say ASAP – Always Say A Prayer – and Spanem Bohem (Godspeed).

In lieu of flowers, the family suggests memorials be given to Sts. Peter and Paul Cemetery Endowment Fund, New Hradec.
To order memorial trees or send flowers to the family in memory of Beata Havelka, please visit our flower store.