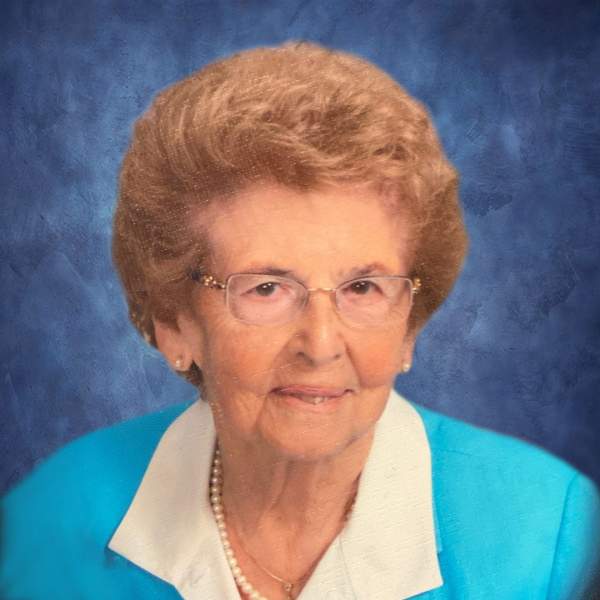 A funeral Mass for Beatrice Messer, 90, of Richardton will be held at 9:30 am on Tuesday, November 3, 2020 at St. Mary’s Catholic Church in Richardton with Father Thomas Wordekemper celebrating. Burial will take place in St. Mary Cemetery.

For those attending, please adhere to social distancing guidelines provided by the CDC and ND Department of Health. To view the live webcast of Beatrice’s funeral mass, rosary, and vigil please go to www.stevensonfuneralhome.com, select photos and videos. The livestream will be active 15 minutes before each service.

Beatrice went to be with Our Lord, on October 29, 2020 surrounded by her family. Beatrice was a loving wife, mother, grandmother, great-grandmother and sister.

Beatrice Mary Elkin was born July 29, 1930 to Alfred and Olinda Frederick Elkin, and was raised on the family farm south of Taylor. Beatrice was an animal lover and an avid horsewoman who loved riding. As a young girl, she rode the river pastures to keep count on the family herd while out grazing. When it came to milking the cows or cooking for the hired crew, she was always her mother’s right hand. She completed her elementary education in rural schools near the farm and entered Taylor High School where she graduated with honors in 1947. Beatrice continued her education at Dickinson State Teachers College and taught school in Springvale District, south of Richardton, for two years.

She met Ralph J. Messer at a dance and they later married on June 28, 1949 at St. Mary’s in Richardton. They were blessed with five children, Setona, Cynthia, Debra, Ralph and Neal. Together, they lived on a farm near Ralph’s parents where they started and ran their farming operation. She loved everything that came with farming. She took great pride in being the official “transportation coordinator/chauffeur” when farm equipment needed to be moved from field to field. Every spring she made sure to bury palms in the fields so that the crops would be blessed.

In 1956, Ralph took an opportunity in the implement business and in addition to managing the needs of their home and children; Beatrice spent many hours doing bookwork for their company, Richardton Farm Equipment. Together, they enjoyed supporting the local farmers until they sold the business in 1977.
Beatrice also loved to garden, and she never failed to produce all the vegetables they needed for the winter. Beatrice and her girls would make a plethora of jellies and jams, as well as canning and freezing the garden produce. She was famous for her “German Potato Salad” and her amazing apple pies and cookies will be remembered and missed!

Beatrice enjoyed watching game shows on TV, especially “Wheel of Fortune” and “Jeopardy”. With her exceptional memory, she would often know the answer before the contestants. She was a dedicated viewer of the EWTN network.

Beatrice and Ralph had a varied and interesting life alongside their career in business. They were lifelong members of the Republican Party, and never missed a local event or a state convention. It is only fitting her funeral takes place on Election Day, now she can watch the election results with Dad. They were active in many community functions, enjoyed playing cards, bowling, camping and fishing. Their love for travel took them to almost every state via their motorhome, and the grandchildren found it a special treat when they were able to join in on the ride. Beatrice was also a member of the Christian Mothers and American Legion Auxiliary.

She was preceded in death by her parents, Alfred and Olinda Elkin; husband, Ralph, infant brother Wilfred Elkin and baby Elkin; and sister, Inez Peters.

In lieu of flowers family suggests donations be made to the St Mary’s Social Center or the St. Mary’s Cemetery Foundation.
To order memorial trees or send flowers to the family in memory of Beatrice Messer, please visit our flower store.