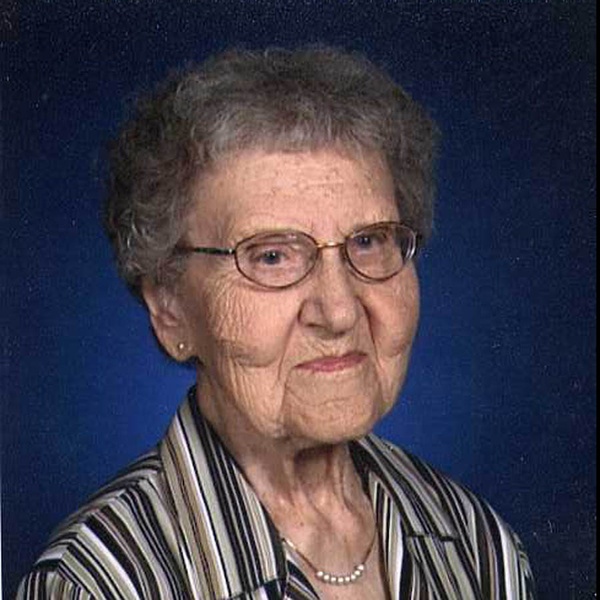 Bertha was born July 13, 1922 to Anton and Anna (Kudrna) Karsky, the second oldest of eight children and two deceased infant brothers. She attended Sts. Peter and Paul School in New Hradec through 8th grade. As a young adult, she worked at various jobs, and especially enjoyed participating in musicals and plays. She loved to dance and sing.

She married Albert Bren on January 9, 1946 upon his return from WWII; and they had five children. They lived north of South Heart for a short time after their marriage, then moving to the Karsky homestead. Eventually they purchased their own farm northwest of New Hradec where they lived until retirement in 1972 at which time they moved into Dickinson.

Bertha was a hard working farmwife who enjoyed gardening, canning, and preparing Sunday dinners on the farm for family and friends. After their move into Dickinson she assisted at the hot lunch program at Berg Elementary. Bertha was an avid volunteer helping at The ArcAid, RSVP, St. Benedict’s, and St. Patrick’s Church. Her Catholic faith was strong, and she could always be found at Holy Hour and Four O’Clock Mass at St. Patrick’s; and praying the rosary which she did several times a day almost to the time she passed away.

She was well known for her famous homemade glazed donuts and always had a stash in her freezer for Sunday morning coffee. Bertha enjoyed crocheting and made Afghans for her children and grandchildren. She was the family historian. Her many journals, scrapbooks, and newspaper clippings provided an endless amount of information and documentation of dates and events. She was a member of the Catholic Workman and Sts. Peter and Paul Rosary Society.

At age 45, Bertha became a breast cancer survivor. She obtained her driver’s license in her 50’s which gave her the freedom to go places on her own, especially after Albert passed away. She and Albert enjoyed vacationing and camping in their TransVan, and attending Albert’s Army Reunions; with the highlight of their travels being their Hawaii trip. Family was special to her, especially her grandchildren and great grandchildren. She always enjoyed their hugs and visits. Bertha became a resident of Evergreen and then St. Benedicts Health Center in 2013 where she received the compassionate and loving care of the staff until her passing.

In lieu of flowers, the family requests donations be made to St. Benedict’s Health Center.
To order memorial trees or send flowers to the family in memory of Bertha Bren, please visit our flower store.