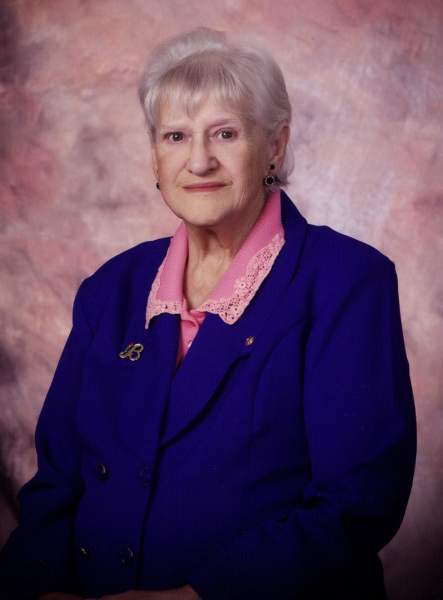 Due to the recent outbreak of the Coronavirus, public officials have strongly recommended to keep Bertha's funeral services to family and close friends. We ask that if anyone is not feeling well to please stay home and get feeling better. Bertha would have wanted her friends to be in a safe environment during this time of uncertainty. Her family understands and appreciates your thoughts and prayers.

Funeral services for Bertha Ehret, 93, of Plevna, will be 11:00 a.m., Wednesday, March 18, 2020 at the Stevenson Funeral Home in Baker. Burial will follow at the Plevna Community Cemetery in Plevna.

Bertha Hoffman was born on September 22, 1926 the daughter of Edward and Elizabeth (Schopp) Hoffman. She grew up and attended the Lincoln School 1st grade, Dry Fork 2nd grade, Plevna School 3rd -5th grade, Cold Spring School 6th-8th grade. Bertha stayed home and worked alongside her dad as a young girl. She also worked for neighbors whenever they were in need of a helping hand. Bertha got acquainted with Bill when she was a young girl, the age of 13 years, at a basketball game in Plevna, on the 4th of July. At the age of 15 years old Bill started to call on Bertha. They dated for 3 years until Bertha turned 18. That same year she turned 18 they got married the 24th of September 1944. She then moved South of Plevna with her husband Bill to the family farm. There they lived two years on the farm with Bills folks until his father moved to Plevna the year of 1946. There Bertha and Bill raised their children Floyd, Barbara, and Kent. Bertha was a house wife and also a helper outside alongside of her husband putting up hay and many other things that was outside work.

Bertha accepted her Lord and Savior into her heart at the age of 22. That was the same year of 1949 when her daughter was born. Bertha was a very active person. She was a 4-H leader to 4 different classes of girls. She taught them cooking, baking, and canning. She belonged to a sewing club, and also to a home demonstration club called Happy Neighbors where she served as president several times. Bertha and her husband belonged to Bible Study Group. She was active in the church. She was a Sunday School Teacher for pre-school and 1st grade. She also helped teach in vacation Bible School. Bertha also sang in the church choir in Christmas and Easter services for a number of years. She also ministered through her solo songs she sang. Bertha then became a choir director for a few years. Bertha sang many solos for afternoon church services. Bertha was active as a president for the Ladies Aid group.

Bertha worked alongside her husband Bill as caretaker of 5 cemeteries: Peace Lutheran, Plevna Union, Westmore, Lame Jones and Catholic. They worked on the cemeteries for 11 years from April 1979 to April 1990. Also through that times they both took care of the Emmanuel Evangelical Free Church as a custodian and did all of the outside ground work like watering the lawn and cutting the grass. They did this for 12 years, from April 1978 to November 1990. Bertha and Bill retired from the church and cemetery work. Bertha then went to work for Green Thumb. She worked there for 6 years, from November 1994 to October 2000.
Bertha loved to crochet. This was her favorite hobby. She crocheted afghan’s for her three children, seven grandchildren, and 16 great-grandchildren. She also crocheted one for each of her adopted grandchildren. Besides that, she crocheted many doilies, table clothes, chair sets and gave afghan’s for wedding gifts and baby gifts. After Bertha lost her husband Bill she moved south of Baker to live with her daughter Barbara and husband Connie Knapp.

Bertha was also very active in the Plevna Senior Citizen Group. She served times as president and enjoyed every bit of it. Bertha, with her husband Bill, enjoyed traveling. They traveled through Canada, Western part of Montana, Idaho, Washington, and to the Eastern part of North and South Dakota, Wisconsin, and Michigan.