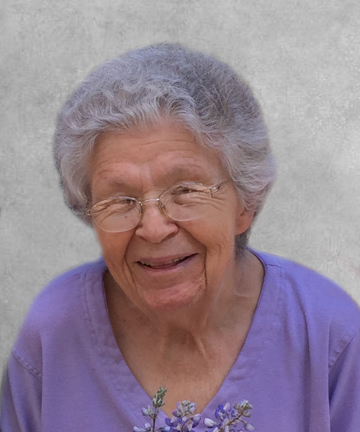 Funeral service for Bettie Erickson, 90, of Ekalaka, will be 11:00 a.m., Saturday, June 11, 2022 at Stevenson Funeral Home in Ekalaka with Pastor Jon Champlin officiating.  Burial will follow at Beaver Lodge Cemetery.

Bettie McClaran was born in Weinert, Texas on November 21, 1931 to John Duke (J.D.) McClaran and Ann Wilkie (Howard) McClaran. She joined her brother, John Howard McClaran, in the home, and the two would enjoy a very close friendship throughout their lives. Her father passed away when she was 12, and many duties of the Texas farm life would become her and John’s responsibility to maintain. Bettie was a quiet woman of few words, but she was never afraid to reach new goals. Throughout her life, she would speak very little about where she’d been or what she’d accomplished. Her farm life roots reflected in her simple, basic and direct approach to any matters ahead.

From birth, she struggled with her eyesight and this prevented her from being the military nurse she aspired to be. But she attended nursing school in Wichita Falls, Texas. Following graduation, she spent time in the southeast working in various states including Alabama. Upon returning to Texas, she became the attending nurse of the first open heart surgery performed in El Paso, Texas. She also spent much time attending to patients of the cancer ward.

In 1966, she married Carl Moore, in El Paso, Texas; the couple later divorced in 1975. In 1976, she answered an ad in a nursing journal about a small-town hospital in Montana. That advertisement brought her to Dahl Memorial Hospital of Ekalaka, Montana. Here, she found the loves of her life, both with Marvin Erickson and the entire community of Carter County.

She wed Marvin on 10/14/1976, in Deadwood South Dakota and both continued employment at Dahl Memorial until retirement.

As rural medicine evolved, Dahl Memorial saw the need for Emergency Medical Technicians. For many years, Marvin and the crew would deliver the patients to the hospital and Bettie would join as the attending nurse for transport to larger facilities. Eventually, she would also attend training, classes and testing to become the first registered nurse in Montana to also hold the certificate as an EMT. Throughout her life, she dedicated much time to her passions, which included her faith, animals, community and medicine. For many years, she raised bum lambs and Marvin had to make sure they were sheared correctly. From church events and pancake suppers to Geological Society picnics, Bettie could be found in the kitchen with the community.

Over the years, she and Marvin filled their schedules with work and community. Their many travels involved attending functions in Texas, but plenty of time was factored in to visit family and friends along the way. For many years, they also traveled to square dancing competitions, one of which was held in Alberta, Canada. Bettie filled her life with a wide variety of interests and knowledge. She was never idle, even over the long night shifts at the hospital, she always had her knitting close. She had constant companions with her dogs and cat.

She was preceded in death by her husband, Marvin Erickson, her parents and her brother, John McClaran.

Due to Bettie’s deep devotion and love of being a nurse and serving the community of Ekalaka for so many years, memorials may be made to Dahl Memorial Hospital.