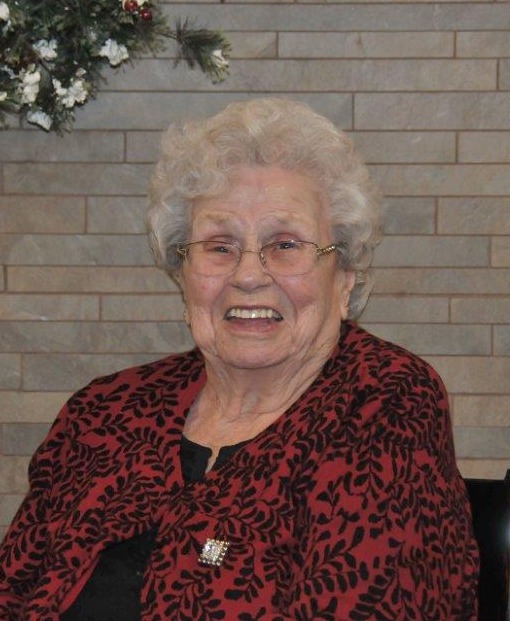 Betty (Johnson) Cornell passed peacefully from this life on July 20, 2022 at the age of 98 at St Luke’s Care Center, Dickinson, ND.

A celebration of life will be 1:00 p.m., Tuesday, July 26, 2022 at Stevenson Funeral Home with Pastor Dawn Busch officiating.

Betty Carol was born May 14, 1924 in Mott, ND to Peter and Hattie (Svihovec) Johnson. She was one of three children. She lived in Mott for 12 years before moving to Dickinson, ND. She attended Roosevelt Grade School and graduated from Dickinson High School where she was a cheerleader for 3 years.

Betty married Kenneth Leppart and to his union 5 children were born. She cooked for her mother who owned the City Café in Dickinson at that time.

In 1953, Betty married Ted Cornell at Wibaux, MT. To this union 4 girls were born. They made their home in Belfield, ND where Ted was the night policeman and Betty worked at Frank’s Coffee Shop. In 1955, she became manager of the lunch counter at Painted Canyon.

In 1956, Ted and Betty moved to Medora, ND. Betty went to work for the Gold Seal Company cooking at the Roughrider Hotel for about 12 years. She finished her cooking career at Bud’s Café which later became the Cowboy Café. She spent many long, hard hours in the kitchen and was known for her delicious caramel rolls and soups. She made many friends while working and many fond memories were made.

Ted and Betty took care of the Medora Cemetery for many years where they often enlisted the help of their children.
Their home was always open to all their friends and neighbors and even some tourists passing through Medora. They enjoyed growing a garden and sharing their produce with their friends and neighbors. Rides in the T.R. National Park became a regular activity after they were both retired. Spending time with their grandchildren was one of the activities they enjoyed the most.
Betty was a talented cook and baker. Her delicious food was enjoyed not only by the customers of the cafés where she cooked, but by many potlucks, funerals, and community events. In later years, she became a fan of game shows, especially Wheel of Fortune and The Price is Right. She had a great sense of humor, often surprising us with her wit.

Betty broke her hip in the spring of 2015. She moved into St. Benedict’s Nursing Home in April of 2015 and later to St. Luke’s Care Center in 2017. She always enjoyed taking part in the activities and was especially lucky at BINGO and Pokeno. We wish to thank all her caretakers for the wonderful care she received.

She was preceded in death by her parents; her husband, Ted; her children Bonnie Leach, David Leppart, and Douglas Leppart; a grandson Michael Groce; brothers Roland Johnson and Bernard Johnson; and special friend Muggs Vanvig.