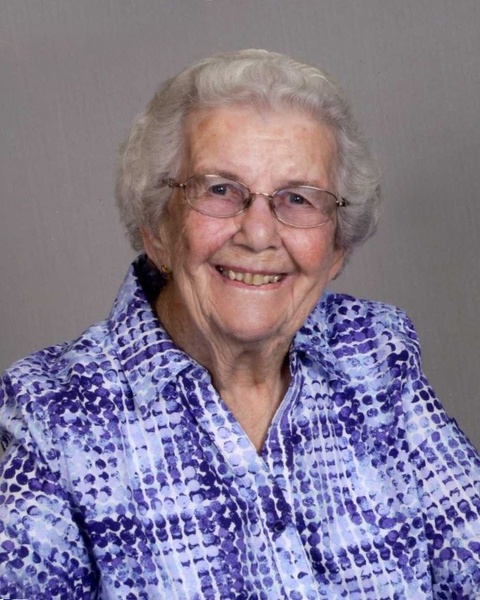 Caroline Kuylen was born in Dickinson on December 19, 1931, the daughter of Casey and Hortense (Leyten) Kuylen, who were immigrants from Holland.  She grew up four miles southwest of Dickinson on the family farm and attended country school through the eighth grade. She then attended Model High School in Dickinson, graduating in 1949.  After her schooling, she helped her parents on the farm for twelve years until her marriage. Caroline married Rudy Heidt on October 12, 1961, at St. Patrick’s Catholic Church. They made their home 12 miles southwest of Dickinson where they raised their children.   Caroline lived at their home, until retiring in 2012.  She was a devoted farm wife, mother, and agri-business partner with Rudy on the farm, making sure their children had a good education along with music lessons.  She truly loved being a partner in the entire operation of the business, including the work of being a rancher and farming the land alongside Rudy.  Over the years, together they won soil conservation, wildlife, and land management awards. Her Dutch heritage was important to her and she actively contributed and participated in the area Ethnic Festivals for many years.  In 1989, Rudy and Caroline traveled to the Netherlands for a five generation family reunion along with their youngest daughter, LeeAnn.

Caroline’s faith shined brightly and she touched lives in a profound holy way. In 1991-1992 she accompanied a pilgrimage group to Medjugorje and then again in 1994.  She was an active Catholic Daughter and attended several state and national conventions.  Caroline also served as a Eucharistic Minister 20+ years, Rosary Leader 10 years, Choir Member 30+ years, Catholic Daughters 30+ years, Christian Mothers 50+years, and served with Dickinson Area Cursillo.  She was an inaugural member of the Dakota Western Auto Club for over 40 years, St. Pius Verein for 60 years, St. Anthony’s Club for 15 years and the Elks Club.

In 2015, Caroline had heart surgery and had to cut back a bit.   Her spare time was filled with reading, listening to Trinity High School sports, watching football on Saturday and Sunday, generous hours of volunteer work and prayer, and she joyfully spent time with her children and grandchildren.  Caroline’s faith was the source of her greatest strength and peace.  She gracefully shared her love of Christ as a devout and steadfast servant through her service to family, neighbors, friends, and community.  The life she cherished most was simple, hardworking, and entertainment was being a close knit family.  She was a wonderful, caring, supportive wife, mother (in-law), grandmother, sister, aunt, and friend.

She is preceded in death by her parents; husband, Rudy Heidt (2008); one stillborn child; only sister, Cathy Gruman; and son-in-law, Mark Bacon.

To order memorial trees or send flowers to the family in memory of Caroline Heidt, please visit our flower store.