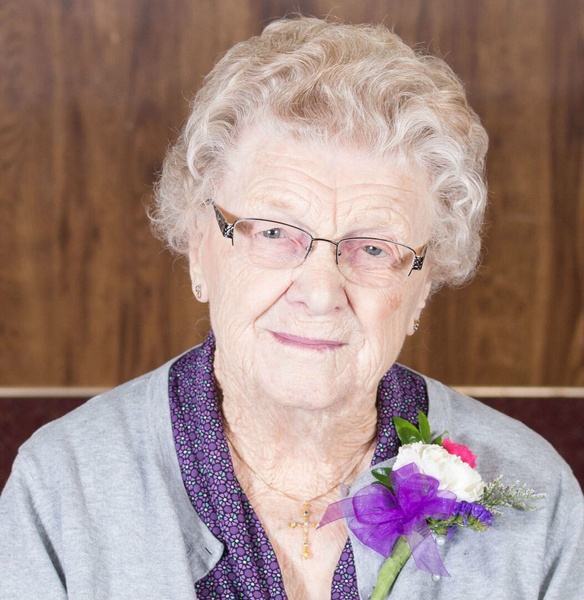 Funeral Mass for Catherine Kearnes, 102, of Richardton, will be 9:30 a.m. Wednesday, October 14, 2020 at St. Mary’s Catholic Church, Richardton. Burial will follow in the St. Mary’s cemetery.

Catherine passed away Wednesday, October 7, 2020 at Evergreen in Dickinson, ND.

Katharina (Berger) Kearnes was born on March 15, 1918, in Terry, Montana, to Jacob and Elizabeth (Jantzer) Berger. At the tender age of seven months, she took her very first trip to North Dakota, and there is where she would call home for the next 102 ½ years.

Known most of her life as Catherine to her family and friends, Catherine grew up in the Glen Ullin and Hebron area. It was when the family moved south of Hebron, that Catherine first met one of the Kearnes’ boys who lived across the road from them. Their paths would cross many years later when Catherine became a “hired girl” for the Kearnes’, and Harry, one of their youngest sons, decided that she was the one. It took a little pursuing, but eventually, Harry wore Catherine down, and they were married in Everett, Washington, on December 16, 1942, shortly before Harry left for the European Theatre.

As one of the eldest in the family of twelve, Catherine learned at a very young age how to work hard in the field and in the house, to care for her siblings, to cook and bake, and to help watch for the Revenuers. These were skills that she used throughout her life in her own home and as an employee. Even those early Revenuer-watching skills were used to keep track of all her kids! Catherine never needed to look for a job because her reputation as a cook and a waitress also guaranteed that she was one of the first to receive a call if an opening was available. As such, she worked in several cafes in Richardton, at the schools, and at the Assumption Abbey. If she wasn’t working, she was more than happy to attend a dance, play a board game, or play a card game. She even danced twice at her grandson’s wedding at 101 ½ years of age!

While many of Catherine’s kitchen talents are famous within the family, her caramel rolls really are world famous! Her Chiffon pie, Blachinda, Kasenip, Pfeffernusse, and many other German recipes were savored by her family, relatives and friends. You knew if you stopped at Catherine’s, you were in for some good eating, and you wouldn’t leave hungry! She was also known to brew some pretty sought-after Chokecherry wine, and her Red Eye could give you quite the boost!

Catherine’s talents didn’t end in the kitchen, she lovingly created beautiful heirlooms for her family by crocheting treasured tablecloths and doilies. Her afghans have warmed many and her potholders are some of the best ever made. Catherine also was an amazing gardener. There was nothing she wasn’t able to grow, and she enjoyed sharing her harvest with family and friends. Catherine was also the family historian; not only did she keep copious notes, but she could recall almost any date and give you the relationship of any relative at any time.

Always a learner, Catherine learned how to email in her 80s, but when she received an iPad in her mid-90s, she faithfully emailed daily, checked the weather on the Internet, and read several different newspapers, especially the obituaries. When she wasn’t emailing or on the Internet, she enjoyed playing pinochle and a variety of other games on her iPad.

Catherine was a devout Catholic her entire life, and she dedicated time each morning and evening to praying the rosary, and when she was no longer able to attend Mass, she would watch it several times a day on television. She has been a member of the St. Mary’s Catholic Church in Richardton since 1947. She was a lifelong member of the Christian Mothers.

Catherine left this world the evening of Wednesday, October 7, 2020. Waiting to greet her and begin the pinochle tournament are her husband, Harry, her parents, six brothers, four sisters, fourteen brothers-in-law, eleven sisters-in-law, and numerous nieces and nephews.

Catherine loved her family dearly, and she will be forever remembered and forever missed by her children Floyd (Maggie) Kearnes, Elaine (Howard) Pugh, Karen (Will) Speaker, Harriet (Les) Lantz, and Patty Kearnes; her six grandchildren, her seven great grandchildren, and her two great-great grandchildren. She is also survived by her sister Josephine Kuntz, and two sisters-in-law, Florence (Paul) Berger, and Florence (Joe) Berger, and numerous nieces and nephews.

The family wishes to extend a special thank you to Catherine’s special neighbor and friends, Marie Hauck, Dennis Zenter and Don Zenter, and to Catherine’s many friends who checked on her faithfully. They also extend a special thank you to Evergreen for their care and concern, especially Catherine’s special friend, Brooke. The family also most gratefully appreciates the kindness and love of Father Thomas. Mom looked forward to every Friday for a little spiritual guidance and a spirited discussion.
To order memorial trees or send flowers to the family in memory of Catherine Kearnes, please visit our flower store.