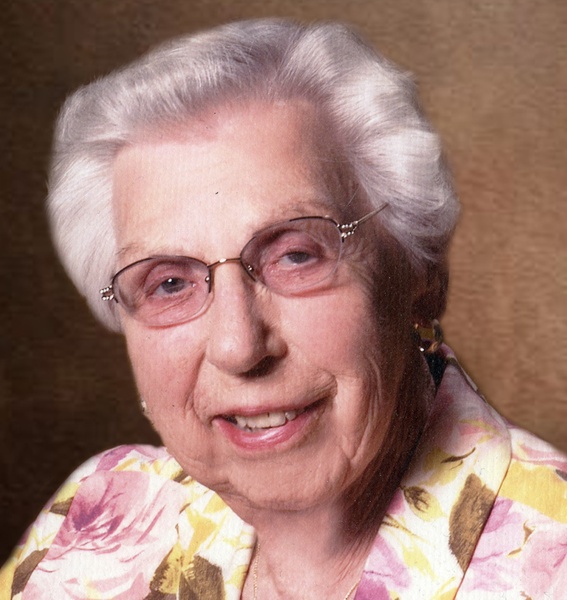 
Catherine was born in Andover, SD on July 19, 1920, the first child of four girls to Elizabeth (Schuring) Niehaus and Frank Niehaus.  She lived with her parents and three younger sisters (Josephine, Lillian and Mildred) on the family farm graduating from Andover High School in 1938.  That summer, the family survived a devastating tornado that destroyed all of their earthly possessions including all the money Catherine had saved for college.  Somehow, her father was able to arrange financing and she started at Northern State College in the fall of 1938, studying business and accounting.  During that time, she worked at the bank in Andover.


She then moved to Richardton, ND where she worked at the First State Bank of Richardton.  While living and working at the bank in Richardton, she was active as a Youth Group and Girl Scout leader.  She met her future husband, Thomas (Tommie) F. Moore, while he was working on a Northern Pacific railroad bridge crew.  They married in August, 1947 and moved to Dickinson, ND.  There she started working in the Clerk of Courts office for Stark County until she was recruited to work for Schnell’s Livestock, later changed to Stockman’s Livestock in Dickinson.  She worked in the office for 62 years, eventually retiring in June of 2009.  During her 62 years there, she worked with four generations of the Schnell family.


Catherine was a founding member of the DAVA (Disabled American Veterans Auxiliary) in Dickinson and was the last active member of the Dickinson chapter until 2016 when she relocated to Valley Eldercare in Grand Forks.  She held a number of offices in the DAVA including State Commander and for many years was the “little old lady” who would carry the United States flag leading the 4th of July Parade in Dickinson.  She was also known for leading the Pledge of Allegiance to the Flag and reciting John McCrae’s poem “In Flanders Fields” on many Veteran’s Day and Memorial Day celebrations.


In the 1960’s she was a founding member of the Trinity High School annual Mardi Gras which was originally organized to raise funds to buy band uniforms for the newly opened Catholic high school.  She remained active for many years with the Mardi Gras, overseeing the kitchen crew and clerking for the auction to name a few of her duties.


St. Patrick’s Catholic Church played a very important role in her lifetime in Dickinson.  She was involved with the Catholic Daughters of America, was an active member of the church choir, a Eucharistic Minister, a reader and a “keeper of the keys” closing the church for many years on Saturday nights after devotions.


Catherine also served on the Board of Directors for St. Joseph’s Hospital for a number of years.  She loved participating and attending the annual Charity Ball fund raiser for the hospital.  Despite all of her work responsibilities and community involvement, Catherine was a Cub Scout leader during the years that Walter and Patrick were involved in scouting.  For several years Catherine could be seen with Walter or Pat very early on Sunday mornings at the Northern Pacific depot, helping her sons load up packs of the Minneapolis Tribune they then delivered around rural Dickinson.  In her spare time, Catherine loved gardening in the spring and summer and canning in the fall.  She also loved yard work and tending to her flowers.  She became an avid stamp and coin collector as well.


Her husband, Tommie, died of lung cancer in 1994.  For many years after he died, Catherine could be seen in the early morning walking the road to the cemetery to visit Tommie’s grave, saying the rosary as she walked.