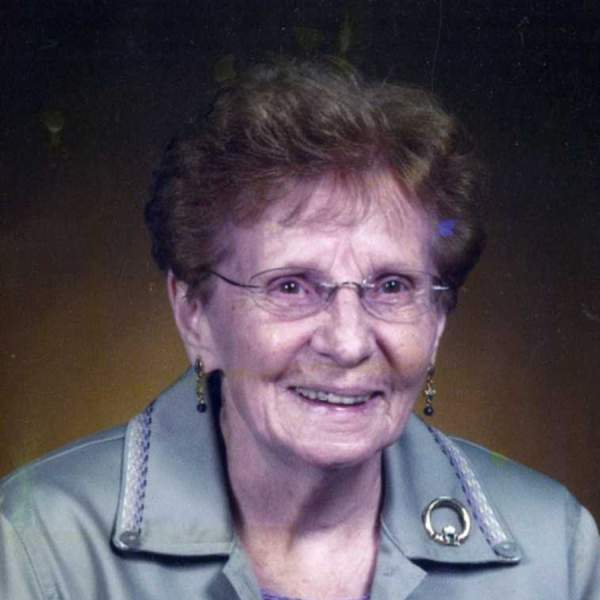 Cecelia Jung, age 99, formerly of New England passed away October 29, 2019 at the Western Horizons Living Center in Hettinger, ND. Funeral services originally scheduled for June 19, 2020 were cancelled due to the pandemic. A private family graveside service will be held at St. Mary’s Catholic Cemetery. A memorial mass for Cecelia will be scheduled at a later date.

Cecelia Jung was born October 10, 1920 on the family farm near Schefield, Stark County ND to Valentine Braun and Christina (Kuntz) Braun. She attended early elementary school at St. Mary’s Richardton and rural school near Antelope, ND. Following the death of her Mother (Christina), in 1925 her Father and Stepmother Elizabeth (Schaaf) Braun moved to Reeder, ND where she was raised with brothers Jacob, Herman, Donald, Eugene and sister, Loyola. Cecelia completed her early education at Reeder and Lightning Creek school near Bucyrus, ND.

On June 11, 1941 Cecelia married Jacob Jung at the Reeder Catholic church. Later they moved to the Jung family farm in Tepee Butte township near New England. Here six children, Jeannie, Gerald (Sonny), Gary, Dale, Daryl and Patricia were born and raised. A son David was born and died in 1960. In 1987 Jacob passed away and Cecelia remained on the family farm until 2015.

Cecelia was born when Woodrow Wilson was President. In her near 100 years of life she lived through 18 Presidents, the Great Depression, World War II, the first landing on the moon and all the many changes of the past 50 years. In spite of these great events she always remained true to her roots – the farm, her home, her family and her faith. Raised during a time of hardships, she always maintained that pioneer spirit. With roads blocked from heavy snow during the terrible winter of 1949, she rode in a sleigh filled with straw, pulled by horses through a pasture to get to the highway to meet a ride to the hospital to have a baby. She worked extremely hard on the farm, raising six children, milking cows, planting and caring for a huge garden, making all the meals, canning food, making jelly and baking continuously.

When the North Dakota grandchildren were growing up it was always Sunday afternoon at the farm with food, fun and family. Cecelia would have goodies galore and cater to everyone. Her fried chicken, homemade macaroni and cheese, leaf-lard cookies, poppy seed and orange rolls were legendary.

She was very particular about her hair and loved having it just right. Of course she never felt it was quite perfect enough, even though she was assured it was. She could get quite adventurous with her color choices but always favored a red tint.

Cecelia and the neighboring farm ladies belonged to “CLUB”. They would take turns hosting at each other’s homes for a lovely afternoon of friendship, catching up, laughter and lunch. The lunches started simple in nature, but in time they evolved into some splendid culinary delights.

Cecelia could visit with anyone and loved when people stopped by. If only for a short time they got the full treatment, chit chat, coffee and goodies. It was heavy on the chit chat. She was teased that she could talk 60 miles per hour with gusts to 95.

Her mantra could have been “Though She Be But Little, She Is Fierce”. This was especially true when at age 88 she singlehandedly took care of a group of racoons who were terrorizing her house. In her kitchen at age 90 she did ten toe touches with the palms of her hands on the floor. She then proceeded to do five more.
Cecelia reluctantly left the farm in Sept 2014. She entered the Western Horizons Living Center on April 1, 2015. This became her home for the next 4.5 years. Although it was difficult during this time, she maintained a positive attitude always saying “ I’m doing OK-I’m comfortable”, but she always missed her house on the farm. The staff at Western Horizons are to be thanked for all the care and help they provided for her.

From Words Of Hope by Pastor Amundson, “Do not be afraid, I go before you always, come follow me and I will give you rest” and with thoughts of Psalm 46 – be still and know that I (God) am here! The promise that God will give us calm and peace today and everyday as we turn to him to walk with us.
To order memorial trees or send flowers to the family in memory of Cecelia Jung, please visit our flower store.