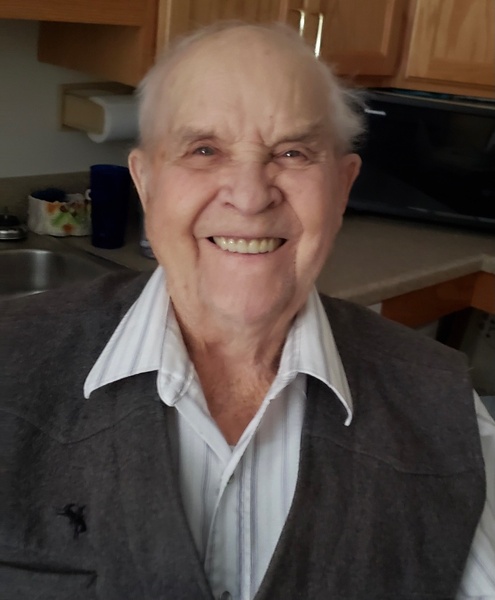 They rode horseback to the Lame Jones School through his eight years of education. His three older brothers joined various military branches so he stayed home on the homestead to do the ranching and farming responsibilities. Those responsibilities included sheepherding out of the sheep wagon.

In December 1944 he went to the Lame Jones School Christmas party and took note of the young school teacher, Pearl Noftsker. He married that beautiful young lady in Miles City on June 2, 1945. Their first home was at the Hanley family homestead on Spring Creek. They continued to live in the Baker area where Evelyn Ann and Jean Marie were born. The adventure of the timber industry drew Dad’s attention and in January 1948 they moved and made their home east of Whitefish, MT for a short while before buying property and settling into the Bissell Community west of Whitefish. This is where Sharon Leigh and Judy Lynn were born.

We have the fondest of memories of hard work before fun and play. Dad logged by day, farmed and hayed by night and when time was available, we went swimming in the Stillwater River, fishing wherever you might catch one, and making lifelong friends while participating in the community and neighborly activities of Grange, 4-H, playing cards and Bissell dances where Dad played the guitar and sang and we all learned to dance.

In October 1970 they sold the farm in Bissell and moved into Whitefish making more friends in their new neighborhood but remaining close with the Bissell friends. In 1972 with all of the girls out of high school they started their travel adventures. They spent many winters in Apache Junction, AZ away from the snow and also enjoyed trips to the East and West Coasts of the United States, Hawaii and Alaska. In 2001 with mom’s declining health they resumed life in the family home in Whitefish and then in 2004, they sold the house in Whitefish and moved back to Baker.

Dad lost his lifelong sweetheart and dancing partner in 2014 and later that year, he moved back to Kalispell where he lived independently until the spring of 2021 and he moved into St. Joseph’s Assisted Living in Polson. He was there a short time but enjoyed playing cards and doing puzzles with the other residents.

Dad passed away July 26, 2021 at St. Luke Community Hospital surrounded by family. At 98.5 years old, he succumbed after a short illness, but mostly just from old age.

Preceding him in death were his wife, Pearl; parents Clifford and Cora Ethel Hanley and brothers George, Jack, and Jean and sons in law Larry Dean Kelch and Harry Tronstad.

Memorial services for Clifford will be held on Sunday, August 8, 2021 at 2:00 P.M. at the Whitefish Moose Lodge. Graveside services will be at the Bonnievale Cemetery in Baker, MT on Thursday, August 12 at 11:00 am. Memories and condolences may be sent to the family by visiting www.stevensonfuneralhome.com or www.lakefuneralhomeandcremation.com. Memorials may be sent to the Flathead 4-H, Fallon County 4-H, St Joseph’s Assisted Living in Polson, or St. Luke Community Hospital in Ronan.
To order memorial trees or send flowers to the family in memory of Clifford Hanley, please visit our flower store.