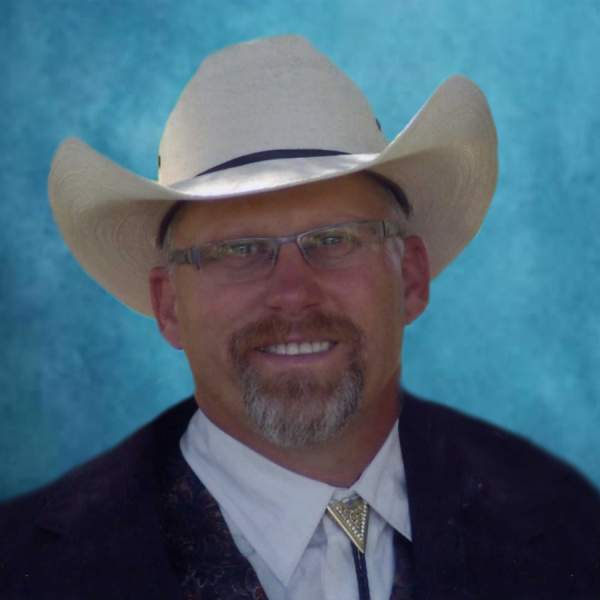 Funeral Mass for Darryl R. Binstock, 52, of Dickinson will be held privately at St Joseph’s Catholic Church in Dickinson, ND, on Monday April 27th at 2:00 p.m. It will also be live streamed. Following will be the burial at Sts. Peter and Paul’s Cemetery in New Hradec. This will be open to the public as long as individuals remain at their vehicles and adhere to the CDC social distancing guidelines. Due to COVID, a celebration of life will take place at a later and safer date.

Darryl Binstock, a lifelong rancher and construction enthusiast, passed away on Tuesday, April 21st at his home surrounded by his loving family, after a hard-fought battle with brain cancer.

Darryl was born in Dickinson, ND, on November 9th, 1967 to Raymond and Sylvia Binstock. He grew up on a farm near New Hradec where he tended to many animals. He attended Dickinson High School and graduated in May of 1986 and later, went on to earn his welding degree at Williston State College. Shortly after graduating college in May of 1988, he began his construction business that he took great pride in and naturally excelled with his detail-oriented nature. He also acquired his own sheep then cattle to follow, and worked to build the size and quality of his herd. He was always excited when it came to that time of year that involved branding his cattle with his /۸ brand. In 2005, Darryl purchased the farm on the Dunn County Line where he lived up until his death. He worked tirelessly to make it his own and built corrals, barns, fixed up fences as well as the house, and kept up his well-groomed yard. It was here where he helped to raise his step-daughters, (although sometimes a trying task) who lovingly called him “Daddy Darryl”. Though often in the same place at the same time, Darryl and Janelle did not meet until later in life and were happily married in August of 2015 at their farm. The reception was to follow in New Hradec where all enjoyed a polka music band and kolachies for the “Kolache Cowboy”. Janelle helped Darryl to enjoy the finer things in life outside of work, and together they took up hobbies including fishing, camping, boating, and an occasional night out dancing. Through their marriage, Darryl gained two step-sons.

Darryl was a loving husband, son, father, brother, uncle and had a passion for life like no other. Darryl was a busy-body and always on the go whether it was travelling daily for a house remodel or staying up all night to safely deliver a calf. There was never a dull moment while in his presence and he was always happy with a smile on his face. He enjoyed a hard days work when it came to his ranching and construction and was proud of his accomplishments, always finding innovative ways to improve things. When enjoying family time, you could always find Darryl making funny faces and jokes, finding anything to put on his head aside from a hat, and enjoying a belly-aching conversation. His sense of humor was incomparable. It was common for him to have a crooked grin on his face while he was thinking up some type of mischievous plan. When people would hear a conversation between him and his father, they would think they were speaking gibberish when in fact, they were complaining to each other in Czech. “Jak se mas,” he would commonly say to strangers, meaning, “how are you?” typically receiving puzzled looks. He was a social butterfly and touched many people’s lives. He had an immense love for his family as well as his animals, especially when it came to his horses and pets, Buck and Molly.

Darryl was a country music connoisseur. Anything that included George Strait, Alan Jackson, Hank Williams Jr., the Big Joe Polka show, or the Molly B Show would take up much of his attention. To go along with his music interests, he also enjoyed watching old westerns and going to the rodeo. His absolute favorite type of rodeo being the PBR (professional bull riding). There wasn’t a hobby that Darryl wouldn’t try. If it had a motor, he could fix it, if it had 4 legs, he would try to ride it, but nothing runs like a Deere!

It’s difficult to define who Darryl was as a person and contain his life in such few sentences, as he was a man that always seemed to live life to the fullest. Words will never do justice to describe how his crooked smile and bear hug could make a person feel! His family is all in agreement that Darryl seemed to have lived 3 lifetimes in his short 52 years on this earth and certainly left his mark! He will truly be missed and has left a void in the lives of all who knew him.

He is preceded in death by his grandparents, John Jr. and Pauline Binstock (Simek), Valentine and Anna Praus (Luptak), various aunts and uncles.

Darryl was joined in Heaven shortly after his passing by his brother-in-law Doug Pekas.
To order memorial trees or send flowers to the family in memory of Darryl Binstock, please visit our flower store.