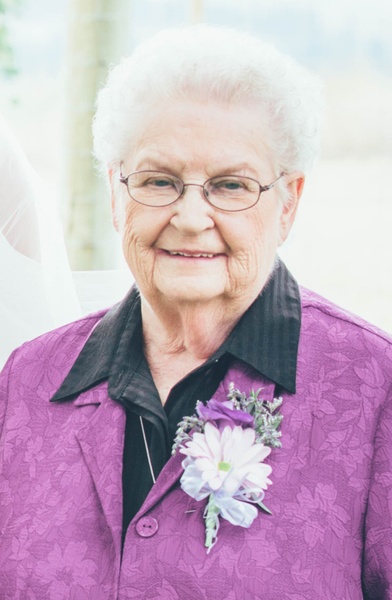 Visitation for Delphine will take place one hour prior to service at American Lutheran Church.

To view the live webcast of Delphine’s funeral service, please go to www.stevensonfuneralhome.com, click on Delphine’s photo, select photos and videos. The livestream will be active 15 minutes before the service.

Please follow social distancing guidelines and mask recommendations provided by the department of health while attending services for Delphine.

Delphine (Fost) Hoenke was born the middle child of three to Carl & Louise (Roget) Fost on January 3, 1930 in Baker, MT.

Delphine was quite a traveler growing up during the great depression. The family moved where the work was - picking apples in Omak, WA; picking hops in Independence, OR; and working in a tree nursery in Portland, OR, which is where Delphine started school and attended 1st through 3rd grade.

The depression ended so the family moved home to Baker. They eventually moved to the country community of Willard, MT where she attended 6th & 7th grade.

Delphine lost her mother, Louise, to stomach cancer in 1941 when she was only 39 years old.
Her dad, Carl decided to move to San Francisco, CA. Right before they left, Delphine met Morris Hoenke. When they met, Morris told his mother, “That is the girl I am going to marry.”

Delphine started high school in Baker transferring to San Francisco and then back to Baker the spring of her junior year and had many fond memories of her time in California.

Morris was her date for both her junior and senior proms in Baker and was so proud that Delphine was the prom queen. She graduated in 1947. After graduation, Delphine went to work at MDU as a secretary.
While dating they enjoyed many Willard dances and roller skating at Green Acres.
Morris and Delphine were married September 5, 1948. They moved to Plevna and Delphine became town clerk and treasurer and bookkeeper for Chevy Garage and other businesses.

When the railroad moved a building off the property where the current Plevna Park sits, it was Morris, Delphine and his mother Louise who planted trees and groomed the land to make the park which is still enjoyed today.

She became a mother of Mike, born in 1951 and Janice in 1958. They lived in apartment upstairs at the Plevna Hotel that Morris’ mother Louise Hoenke owned. They then bought a small house on the edge of town until Morris built their first house behind the Mobil gas station, they own across from the city park. Delphine was on her own when Morris went trucking and custom combining in Nebraska and Oklahoma. In 1957, they had 2 small mail routes which they drove for 22 years. When Morris was gone trucking, Delphine would take the route and watch the station. They lived in two more houses that Morris built in Plevna and lived in the last house for 47 years before moving to Baker.

She worked many jobs but the longest years of her career were spent at the Montana Bank, where she retired. In 1957, Plevna School needed a bus driver, and so begin Morris’ career of driving two generations of Plevna Cougars to school and activities. Delphine was always seen sitting in the first seat on the bus right behind Morris enjoying those trips and sitting in the front row every Cougar game.

Delphine was a dedicated member of Peace Lutheran Church in Plevna. She had a huge heart and was a good listener with good advice. Friends of her kids thought of her as a second mom. She would do almost anything they asked for at the drop of a hat. She was very sweet in nature and loved to socialize. She was always ready to go to all Plevna’s activities and nearby communities which included her kids, grandkids and greats in whatever they participated in.

Preceding her in death was her husband, Morris; parents, Carl and Louise Fost; brothers, Rodney and James Fost.
To order memorial trees or send flowers to the family in memory of Delphine Hoenke, please visit our flower store.