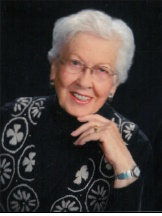 Edna Helen Nupen Sand was born on May 6, 1920, at the family home on the south slope of the Killdeer Mountains near Killdeer, North Dakota. Her parents were Herman and Kristina (Brobakke) Nupen, Norwegian immigrants who operated the Whetstone Store for several years during Edna’s childhood. Edna attended Badlands #3 Country School and graduated from Killdeer High School. She received an associate degree in business from North Dakota State School of Science in Wahpeton, where she met and fell in love with her future husband, Robert R. “Bob” Sand. On September 19, 1942, Edna and Bob were married at the United Lutheran Church in Grand Forks, North Dakota. To this union four children were born: Roberta Rae, Christi, Robert, and Jonathan (Josh). Over the years, Edna and Bob lived in Grand Forks, Bismarck, and Killdeer. Edna lived her final years at Evergreen Assisted Living in Dickinson and Hilltop Home of Comfort in Killdeer.

During her Bismarck years, Edna worked as Education Committee Clerk at the State Legislature and also for the North Dakota Education Association and the North Dakota School Board Association. Edna was a dedicated community volunteer, giving of her time as a Sunday school teacher, church and community vocalist, and board member at the Country School south of Bismarck. She was also active with Circle, the League of Women Voters (president for two years), the Bismarck Horse Club, 50 Years in the Saddle, the Badlands Trail Riders, and the Dunn County Museum. She and Bob were charter members of the De Mores Riders.

Edna enjoyed the simple things in life, especially being outdoors. She enjoyed singing, playing bridge, trail riding (in five different states), building a beautiful cabin with Bob in the Killdeer Mountains (their favorite place in the world), hosting family and friends at the cabin, berry picking, bird watching, and genealogy. Her special passion was putting together scrapbooks that documented family and North Dakota news and history, a creative project that she continued throughout her life.

Preceding her in death were her parents, Herman and Kristina Nupen; her brother Arthur; her sisters Marvel, Lucille, Hazel, and Harriet; her infant daughter Roberta Rae; her son Josh; and her beloved husband, Robert.

In lieu of flowers, the family requests memorials in Edna's memory to the Hill Top Home of Comfort in Killdeer, Evergreen in Dickinson, or St. John's Lutheran Church in Killdeer. Cards may be sent to Christi Neuens at 89 112th Ave NW, Killdeer, ND 58640.
To order memorial trees or send flowers to the family in memory of Edna Sand, please visit our flower store.