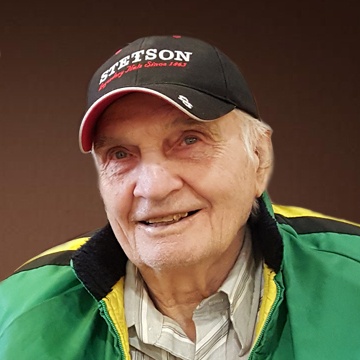 Services for Eldon “Ben” Bondell, 87, of Gladstone, formerly of Baker, MT, will be 10:00 a.m. Friday, March 26, 2021 at Stevenson Funeral Home in Dickinson with Pastor Jim Biswell officiating. Burial will follow at the Bonnievale Cemetery in Baker, MT.

For those unable to attend, the service will be livestreamed on the Stevenson Funeral Home website. Click Ben’s photo, choose photos and videos, and click watch webcast. The link will be available 15 minutes before the service.

Ben was born in Richland County, MT on March 13, 1934, the son of Dinah (Madsen) and Robert Bondell. He moved with his parents as a young boy to the farm located on the big hill. He grew up and began working on the farm, helping his mother. He married Lillian Kinnison on June 15, 1959 in Miles City, MT. To their union three children were born, Nellie Jean, Sheila Fae, and Frank Robert. Together they farmed, ranched and raised their family. He enjoyed raising Angus cattle and Appaloosa horses, and farming.

Ben enjoyed being outdoors, climbing gumbo buttes, and driving around the cattle and crops. The Bondell farm continues on in the family with the children still operating it today. He was a member of the Appaloosa Association and lifetime member of the American Angus Association. He enjoyed being with his grandchildren. To the end he enjoyed his walks, especially walking through the cattle.

Ben is preceded in death by his parents Dinah and Robert; daughter and son-in-law Nellie and Adrian Goroski; brother Verner; and great-grandson Braxtyn.
To order memorial trees or send flowers to the family in memory of Eldon "Ben" Bondell, please visit our flower store.