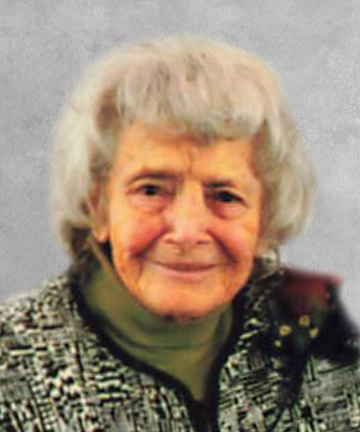 Erna Losing, 95, passed peacefully to her heavenly home on June 8, 2022, at the Fallon Medical Complex.

The Funeral Service for Erna Losing will be 11:00 a.m. Tuesday, June 14, 2022, at the First Baptist Church in Plevna, Montana, with Pastor Josh McLachlan officiating.

Burial will be at the Bonnievale Cemetery in Baker, Montana.

Erna (Burkle) Losing was born on July 29, 1926, to Frederick and Magdalena (Opp) Burkle on the family homestead north of Plevna. She attended school through the 8th grade at Clark Grade School north of the family farm. After her schooling, Erna worked in the bakery in Baker and also did some babysitting in the area. She met and then married Paul Losing on June 17, 1952, in the First Baptist Church in Plevna. Paul and she resided briefly south of Baker and then moved to the family farm west of Baker where she remained until October  2014.  At that time she moved to the Superior  Care Villa  and the last ten months she lived at the Fallon Medical Complex in Baker.

Erna and Paul raised their family to include five children, Larry, Dennis, Karen, Doreen,  and Maxine.  She was a private woman who put family and her faith above all else. She did not know what it meant to be idle. One could find her on the farm milking cows, caring for bum lambs, or working in her garden.  She took great pleasure in her gardening and spent many hours there. She was a very good cook and always made well balanced  meals for her family.  In her younger years she sewed some of her children’s clothing and in later years had time to crochet. Each grandchild was blessed to receive one of her afghans. She enjoyed playing the piano and was self taught.  As she got older she became quite a night owl working on puzzles or reading. Erna cherished her time with her grandchildren and game nights were a favorite time for all.  Erna was an active member of the First Baptist Church in Plevna which was a very important part of her life.

Condolences and remembrances can be shared with the family at stevensonfuneralhome.com.

A lunch will be served at the First Baptist Church in Plevna following the Funeral Service.  Everyone is welcome.

To order memorial trees or send flowers to the family in memory of Erna Losing, please visit our flower store.