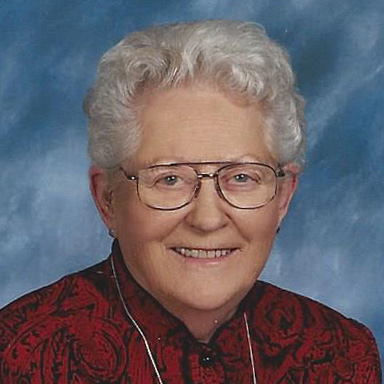 It is with great sadness that the family of Evelyn Florence Sweetman Newton announces her passing on January 13, 2019, at the age of 97 years.

Visitation for Evelyn will take place one hour prior to the service at the church.

Evelyn was born in Fargo, North Dakota on February 10, 1921. When she was nine months old, she and her parents moved to the Manning/Killdeer area where she spent most of her early life. Evelyn attended school in Manning and Killdeer. She developed a love for music and singing which was showcased in numerous school musicals. After high school, she began a career at the Dunn County Courthouse when she met Layton Newton. On May 16th, 1944, she and Layton were married at St. John’s Lutheran Church in Killdeer, after their marriage they farmed with his father on the homestead in Hirshville. During the fall of 1945, they moved two miles south and established their own farm. She and Layton worked tirelessly refurbishing the house. In 1957, they built a new house where they lived for over 60 years.

Evelyn kept busy raising their daughter, Nancy, keeping her garden weed free, and helping Layton in the field. Evelyn shared her love of music by playing the piano and teaching piano lessons. In addition, she worked at Sears for a time, was active in the Alter Guild at church and the Dakota Resource Council. She and Layton also enjoyed the many bus trips they took with friends.  Layton and Evelyn split their time between an apartment in Dickinson and the farm for 25 years. In 2007, Evelyn suffered a stroke and moved to Hawks Point. In 2011, she moved to Colorado to be closer to family.

She was preceded in death by her parents, Robert and Inga Sweetman, her husband Layton, grandsons Dalton and Kyle Davis and son-in-law Paul Elsey.

In lieu of flowers, memorial contributions can be made to the charity of choice or to St. John Lutheran Church, 146 6th Ave W, Dickinson, ND 58601