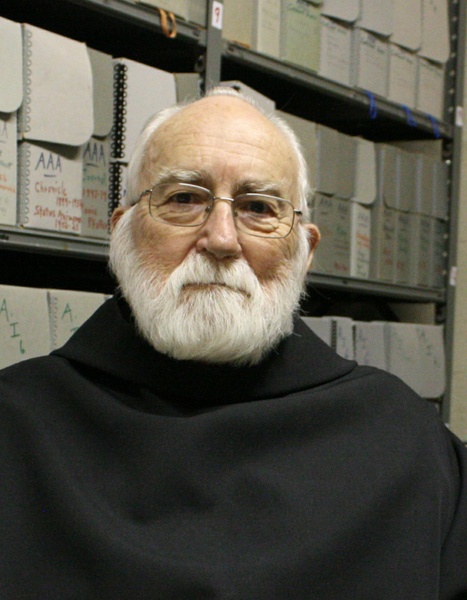 Father Denis Fournier passed on to his eternal reward in the early hours of January 12, 2021, at the Richardton Health Center in Richardton, North Dakota. Father Denis was eighty-six. He did not die of covid-19 or related illness.

Father Denis was fiercely proud of his French-Canadian, Red Lake Falls, MN, origins and therefore insisted that his last name be pronounced in the American fashion (4-nee-ur). He was born prematurely on May 15, 1934 to Alfred and Cecilia (Baril) Fournier and baptized Richard James. His mother’s sister, a Benedictine nun from Mount St. Benedict in Crookston, MN, was a nurse who had just completed a program on caring for premature infants. She soon arrived at the Fournier home to look after the tiny infant until he was out of danger, and after that, she decided that his vocation in life was to be a Benedictine priest. When he was in grade school she made a small altar and some vestments so that he could begin practicing his sacred duties.

Richard James, after completing elementary school and two years of high school in Minnesota, got on a Trailways bus and headed west for Assumption Abbey high school. On the way out, he noticed a loud-mouthed kid from Minneapolis talking to the driver; he turned out to be Gerald Kardong (Father Terrence), also heading to the Abbey high school, and who would later become a monk—as Richard did—and a life-long friend.

After completing high school and two years of college, Richard—given the name Denis by the Abbey—made triennial vows on July 11, 1955. He completed his college education at St. John’s University, Collegeville, MN, and did seminary studies at Assumption Abbey. During the summer, and whenever the seminarians had “free” time, they helped a construction crew build the new Abbey high school where he taught after he was ordained to the priesthood on May 26, 1960. Father Denis continued his education at Marquette University the summers of 1959 and 1960, and was again at Marquette for the second semester and summer session of 1962. In 1963 he earned an MA in English from that university. In 1964 he continued his education at the University of Wisconsin during the summer, and the same in 1965 at St. Louis University.

Despite being an affable superior, Father Denis did not enjoy a position of authority, and when Lawrence Wagner became abbot, begged him for an assignment to Assumption Abbey’s dependent priory in Bogotá where he would escape such duties. He became the director of the primary school there in 1981.

When he returned from Bogotá, Abbot Lawrence assigned him assistant to Benedict Pfaller in the archives in 1984, and then as archivist in 1986, just when he was heading out the door to Ph.D. studies in English at the University of Nebraska, Lincoln. He earned that Ph.D. on December 23, 1989, and returned to what is now known as the University of Mary, teaching full-time until May of 2003, when he had to retire after triple bypass surgery and suffering a small stroke.

In “retirement,” Father Denis did pastoral work in the Catholic parishes in Wibaux and Glendive, MT, on a part-time basis from 2003 to 2005, and full-time from 2006 until 2008. On September 19, 2008, he became associate pastor at the Catholic parish in New Town, ND, and held that position until June, 2010, when he retired to the Abbey for good. He continued to do archival work, and weekend pastoral work for as long as he could manage.

At the Abbey he was appreciated for his sense of humor and his willingness to help, even with menial tasks.

Father Denis was preceded in death by his parents, his brothers LeRoy and Ramon, and his sister Nancy. He is survived by his sisters-in-law Jerri of Mason City, IA and Harriet of El Paso, TX.

A private Mass of Christian Burial will be 10:30 am, Saturday, January 16, 2021 celebrated at Assumption Abbey, followed by burial in the Abbey cemetery.

To view a livestream of the mass, visit stevensonfuneralhome.com, click Father Denis’s photo, click photos and videos and find the webcast. The stream will be available about 10 minutes prior to the service.
To order memorial trees or send flowers to the family in memory of Fr. Denis Fournier, please visit our flower store.