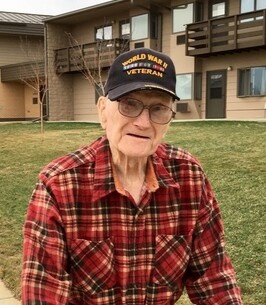 A Celebration of Life was held April 16, 2022 and a private family burial will take place at a later date.

Frederick George Goerndt (better known as Fritz) was born March 30th, 1927, in Hettinger, ND to Walter and Emma (Schar) Goerndt. He was the 4th of 5 children and grew up around Strool, SD. He briefly attended high school in Sorum, SD before its closure. Fritz enlisted in the US Navy 3 days before his 18th birthday in 1945. He started active duty just over a month later, May 5th, 1945, and served as a welder, repairing ships in the Philippines. After his service in the Navy, Fritz worked a variety of jobs before entering the oilfield.

Fritz met the love of his life, Ruby Grace Pederson, of Reader, ND and they were married on September 2nd, 1952, in Lemmon, SD. Like so many in the oilfield, they resided in numerous places moving with the jobs to be had. Sidney, Baker, Bowman, Buffalo, Casper, Terry, Glendive, and Roundup were all places they called home between1952-1959. During that time, they also began their family: Carlynette Mae in 1953, Walter Tolluf (Butch) in 1954, Paul Allen in 1956, and Wade in 1958 while living in a 36’ trailer that they pulled with a Studebaker. After settling their family in Baker in 1960, Fritz worked in Killdeer for a time, but Ruby and the kids did not move again. They added to their brood with Kelly in 1960, Claire in 1962, and Doug in 1964. Fritz continued to work in the oilfield until 1988 when he was forced to go on disability due to an injury to his foot.

The couple faced many trials throughout their marriage, including the loss of their first 3 children, a flood forcing them to evacuate their home in Glendive, a fire that destroyed their home in Baker, another fire that burned down Fritz’s shop, and most recently another home was taken by a tornado while they were in it.

In his younger years Fritz enjoyed hunting and fishing, and Ruby says he got pretty good at water skiing too. He also enjoyed working on old cars, and always seemed to have many people (young and old) looking to him for advice and help with their vehicles. He became a “dad” to many that needed more than just their car repaired, and “Papa Fritz” to numerous little people who knew him. Later, Fritz continued his service by volunteering to drive the VA van to Fort Meade, he and Ruby made countless trips during those 10 years. Fritz’s favorite color has always been purple, and a couple of his favorite songs were Long Black Train by Josh Turner and Ring of Fire by Johnny Cash.

He was preceded in death by his parents, sisters (Irene and Helen), brothers (Jim and Bill), three nieces and nephews, three children (Paul Allen, Carlynette and Butch), a son-in-law (John Custer), and a great grandson (Ruger Custer).

To order memorial trees or send flowers to the family in memory of Fritz Goerndt, please visit our flower store.