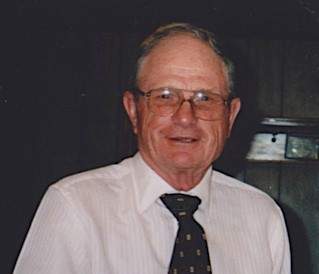 
Gerard passed away on Tuesday, June 11, 2019 at St. Benedict’s Health Center in Dickinson.


Gerard John “Jerry” Jacobs was born at home to J.Q.  and Goldie Violet (Davison) Jacobs on July 18, 1923.  He was the oldest boy, and had five sisters and five brothers.


Jerry attended boarding school at St Mary’s School in New England, ND.  He wanted to go to college and study Civil Engineering, but he was needed at home and World War II interfered with his plans.  He married Lucille (Jones) in 1949, and ended up raising his family of five children in the house where he was born.


His younger brothers lived with him and Lucy, as they were finishing high school, before going out into the world on their own.


Jerry farmed all his life.  He was fascinated by horses, and farmed with them in his earliest years.  His first tractor was an International H.   He was a steward of the land.


Jerry raised Hereford cows, and some baldies in his later years.  They milked cows for many years and sold cream.  The farm had pigs, chickens, geese, and even sheep.


There was never a mechanical problem that Jerry couldn’t fix.  He would study and think, and create parts he needed, and find innovative ways to do seemingly impossible tasks.  He often said, “A guy could …”


When he was 87 the foundation of the barn was crumbling, a barn he had had all his life, and used for horses, and milk cows and hay.  He spent two summers jacking up a section at a time, removing the crumbling foundation by hand, and putting railroad timbers in as a solid foundation.  He straightened the walls, and restored the barn in time for the 2011 Jacobs 100
th
years in the USA reunion.  His granddaughter Taya was married in that barn in 2016.


The love of his life was his wife Lucy.  Their marriage lasted just a month and a day short of 70 years.