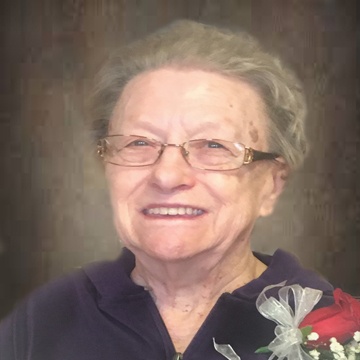 Funeral Service for Gladys Morris, 90, of Baker will be 2:00 p.m. Thursday, February 24, 2022 at the American Lutheran Church with Don Buerkle and Robin Menger officiating.

For those not able to attend the funeral live streaming will be available at stevensonfuneralhome.com. ten minutes prior to service.

Visitation will be one hour prior to service at the American Lutheran Church.

After Don’s military service, which took them to several states, Don and Gladys lived in Big Sandy and Opheim, MT before settling in Inverness, MT. During this time Gladys was employed as an assistant postmistress for the US Postal Service and at Sandvik’s Department Store in Rudyard as a book keeper. In 1969 they followed their best friend’s advice and purchased the Gambles Store in Baker, MT where she has resided since. Together they operated the store until 1988. After selling the store she went to work in the Dietary Department at the Fallon Medical Hospital. In 1997 Randy and Donna purchased Hardware Hank and Gladys returned to work for them until 2010 when she retired.

Gladys was an accomplished cook and baker. The mayor of Baker once told her, “She had the best buns in Baker!” Throughout her life, Gladys loved to entertain friends and family. She hosted many family gatherings and could be found in the kitchen preparing large meals/baking buns for community events. One of Gladys’s favorite pastimes was spending time with her children and grandchildren. She enjoyed playing cards (not as much as Dad though!) and reading. She will be remembered for her generous spirit, love and loyalty to family and friends.

One of Gladys special highlights was being chosen “Lady of the Year” by the sorority groups in Baker and “Employee of the Month” awards when she worked at the hospital.

Gladys’s family would like to thank the Superior Villa and Fallon Medical Nursing Home for their excellent care and compassion while she resided there.

Memorials are suggested to American Lutheran Church, American Cancer Society, Superior Care Villa or a charity of your choice.
To order memorial trees or send flowers to the family in memory of Gladys Morris, please visit our flower store.