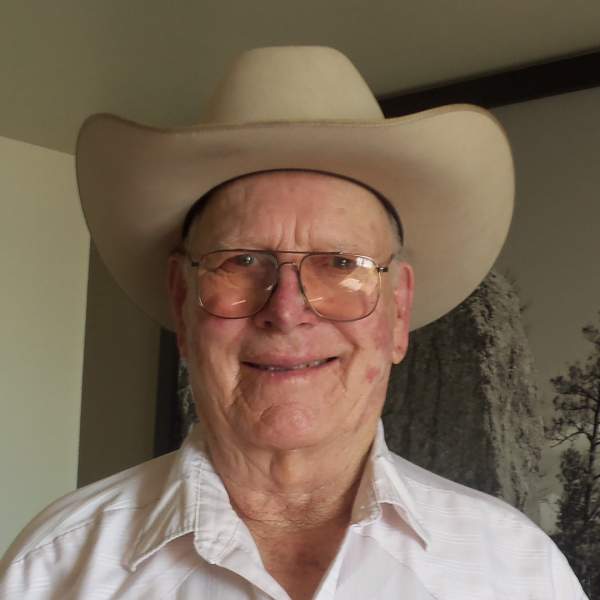 Funeral services for Hughie Rose, 86, of Ekalaka, will be 11:00 a.m. Saturday, February 22, 2020, at Stevenson Funeral Home, in Ekalaka, with Pastor Scott Kiehn officiating. Visitation will take place one hour prior to the service.
Hughie passed away Tuesday, February 18, 2020 at Dahl Memorial Hospital in Ekalaka, Montana.
Hughie John Rose was born January 24, 1934, to Harry and Anita Ewalt Rose in Ekalaka, MT. He grew up on the ranch north of the Chalk Buttes. Hughie married Virginia Nagy from Frenchtown on October 17, 1958. To this union, three children were born: Nancy, Russell, and Patricia. In the early 60’s and a few years in the 90’s, Hughie spent some time working seasonal jobs in Western Montana working on farms and in the sugar factory around Missoula, MT. Hughie spend the remainder of his years on the ranch in the Chalk Buttes until he sold the ranch to Paul and Nancy. After Hughie’s retirement and death of Virginia, he married Darlene Carter on May 24, 2008. The couple continued to make their home in Ekalaka.
Hughie was a member of the Masonic Lodge #120 in Ekalaka, and Albedo Shrine. One his passions was being a member of the Ekalaka Shriner’s Sorrel Horse Patrol where they supported the efforts of the Shriner’s Children Hospitals as well as many local children. Hughie enjoyed his time on the ranch with a good horse and cows. His favorite time of the year was calving. Hughie especially loved spending time with his family and reminiscing about times gone by.
Hughie is survived by his wife, Darlene; children, Nancy (Paul) Brence and Russell (Charise) Rose; Grandchildren, Justin Rose, Michael Rose, Angela (Seth) Sedgwick, Emily (Kyle) Vennes, Buster Kern, Rye Kern, Mary Rose and Rachel Rose. Great grandchildren, Wyatt Sedgwick and Kacee Vennes and numerous cousins and extended family.
He is preceded in death by his parents, Harry and Anita; first wife, Virginia; daughter, Patricia Rose Kern; two grandchildren, Ashley Ann Brence and James Mikel Brence; and sister, Esther (Jack) Geiger.
To order memorial trees or send flowers to the family in memory of Hughie Rose, please visit our flower store.