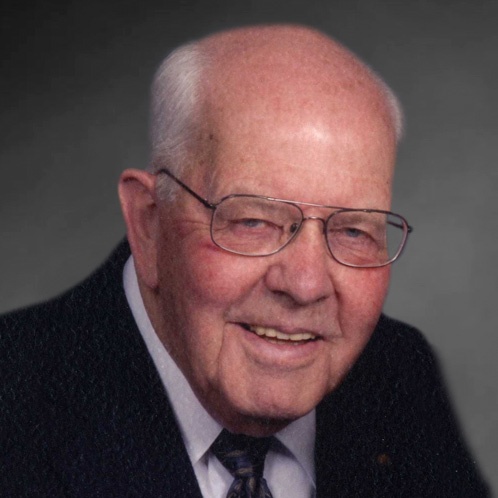 
Jack Dale Olin was born February 12, 1932 in Sims, ND, the son of Arthur and Delia (Jacobson) Olin.  He grew up and attended grade school in Sims.  Jack went on to attend Almont High School; graduating with the class of 1949. Beginning in December of 1953, he served in the United States Army and achieved the rank of Corporal.  While serving in England and Germany, he learned about the concrete business.  After his honorable discharge in 1955, he returned to North Dakota and attended Bismarck State College.  It was during this time that he met Velma Amelia Sailer.  The couple was united in marriage on February 14, 1956 in Bismarck.  To this union three sons were born:  Scott Kent, Bruce Wade and Craig Jack.


Jack believed in working hard and it was evident in all he did.  He began working for the Soo Line Railroad based in Bismarck one year prior to joining the North Dakota Highway Patrol, stationed in Dickinson. In 1961, Jack joined the Dickinson Ready Mix Co.  In 1972, Jack and Gene Fisher became partners and purchased Dickinson Ready Mix.  The ready mix business was a true passion for Jack and he was committed to the day to day operations until his retirement in 2001.


His commitment to community carried over to the state level.  He was a co-founder of the North Dakota Ready Mix & Concrete Products Association. Jack represented southwest North Dakota in the State Legislature for eight years in both the House of Representatives and Senate respectively.  Water was a special passion for Jack and he was instrumental in bringing water to southwest North Dakota.  He served on the ND State Water Commission, West River Diversion Committee, Stark County Water Resource Board, Dickinson Citizens Water Committee, as well as other water organizations.  Education was of the utmost importance to Jack and he served on the ND Board of Higher Education.   He was a member of the Theodore Roosevelt Medora Foundation, Associated General Contractors of North Dakota and other various civic organizations.


Because of his dedication to serving others, Jack was the recipient of numerous awards; Career Achievement from NDRMCPA, Dickinson State University Blue Feather and Meritorious Service Awards and Commodore Award from the North Dakota State Water Commission.


Jack loved time spent with his family.  As a young father, he looked forward to fishing, camping, and snowmobiling with his young family.   Whether gathering for family dinners or meeting every Saturday at the Elks with his friends to shake dice or just reminiscing of his younger years, these moments brought great joy to Jack.  Jack and Velma enjoyed their time together traveling with the family and friends to Florida, Alaska and Branson as well as many other locations.  He especially loved watching bull riding and could tell you the names of all the bulls and riders.


He was preceded in death by his wife, Velma (2014); parents, Arthur and Delia Olin; brother, Keith Olin; and sister, Gaynelle Nesheim.


The family suggests memorials be made to the Theodore Roosevelt Medora Foundation or St. John Lutheran Church Trust Fund in memory of Jack.