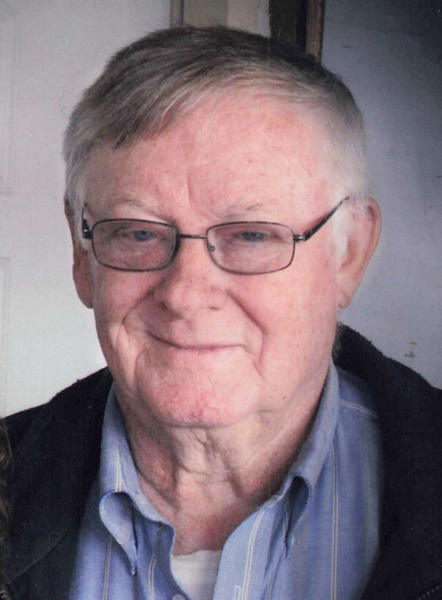 A Memorial service for Joe will be at 11:00 a.m., July 17, 2021 at the Event Center in Ekalaka, Montana Everyone is invited and very welcome. We want you to come prepared with stories and favorite memories about Joe. A Lunch will be held afterward.

Joseph (Joe) Patrick Carey, 82, was born in a log house on the Carey Homestead in the Chalk Buttes near Ekalaka, MT on May 16, 1938. His parents, Joseph Hugh Carey and Mildred Kortum Carey, his two sisters, Mary Ellen and Joan, thrilled to have a boy in their family. Sadly, his father Joe Carey passed away on the ranch of a sudden heart attack just eight days later. Mildred’s parents Walter and Iva Kortum and Mildred’s siblings helped her with the children while she was educated at Kinmann Business School in Spokane, Washington. After her graduation she moved to Miles City, Montana and went to work for Ed Love at Love Motor Company. The three children spent time with their grandparents as well as being in Miles City. Mildred married Wallace Badgett. Mildred was killed in an accident when Joe was 10 and after that the three children lived with their grandparents in Ekalaka.

Joe was always fascinated with cars and mechanics and acquired his first car from Charlie Dawson when he was in the seventh grade. This was his start of buying, fixing and selling used cars. He started working for Vernon Parks at Parks Standard in the eighth grade and worked there until the spring of 1960. Joe graduated from Carter County High School in 1957. He purchased his first new car in 1958 from Love Motor. It was a 1958 white two door Ford Fairlane with a Police Interceptor Motor. He was always up for a race and managed to win most of them. Known for his fast driving and fun ways in Ekakala, as well as Baker, he had lots of fun. He was always up for some mischief causing his grandmother, and later his wife, lots of angst at times. He also drove water trucks to rural fires and loved doing it. Many will tell of their wild rides in the trucks, no gully too deep, not hill too high, no tree too big. He continued this until his health would no longer let him do it.

On June 18, 1960 he married Carole Curry and they moved to the Carey Ranch to begin their wedded life. Their first son Joseph (Don) Donald was born Nov. 13, 1962. In 1964, Joe sustained a very serious farm accident almost losing his right arm. After 3 weeks in Deaconess Hospital, having 3 surgeries and then therapy in Vallejo, California he gradually regained 75% use of his arm. They came home from California in the blizzard of 1964-1965. Unfortunately, they lost all their cattle in the terrible blizzard in mid-December. Their second son, Jon Patrick was born Jan. 3, 1965. Their ranch career was over and Joe began management of the Conoco Station and later the Conoco bulk business until 1970 when he sold it to Vernon Silvis. He then was in the well drilling business for a short while, worked for Dague Trucking for a few years, later acquiring his own trucks and doing his own business. In 1979, he started working for Vernon Preuss as undersheriff. He graduated from the Montana Law Enforcement Academy in 1981. He served one term as sheriff after Vernon retired in 1986. After this in 1991 he began to run his car and truck business very seriously, making friends with Palmer Norby of Sidney and Dennis Bettin in Sioux Falls, SD. He continued until he semi-retired due to ill health in 2015. Joe served on the Ekalaka City Council for three years and was Major of Ekalaka for 19 years. He often said, “No one ever calls the Mayor if they are happy.”

Joe suffered a major heart attack in October 1988 and dealt with serious health issues until his death. He was fortunate to have great medical care all those 32 years and qualified for many new cutting-edge miracles allowing him to keep going. He had it all, the balloon treatments, coronary bypass surgery, shock treatments for arrhythmia, heart monitors, and an abatement. He developed diabetes and gout and was still able to go on. His last three years took its toll and he passed away with end stage heart failure as well as Covid-19.

Joe and Carole were able to do quite a bit of traveling and Joe had 33 states and 3 foreign countries marked off his bucket list. They especially enjoyed Nashville, were in Savannah, GA on 9/11, New Orleans and Alaska. They traveled to California visiting his sisters, went to Texas to see Jon and Lynn, Oregon visiting Mary Ellen, Miami, the Bahamas and Key West, etc. All in all had a great time enjoying everything they saw and did. Joe and his fishing buddy Don Wade had many fun and successful fishing trips to Nipowan, Cananda. He always loved hunting. Joe loved his family and was very proud of his boys. He delighted in his grand and great grand kids. The older he became the more precious they all became to him. Joe lived a full life.
He leaves his wife, Carole, of 60 plus years; sons, Donald (Bonnie) of Billings, MT, Jon (Lynn) of Ekalaka, MT; grandsons, Trent (Mindy) Bellvue, NE, Joseph Donald (JD) Manhattan, MT; granddaughter, Samantha (Damon) Ceynar Glendive, MT; three great grandchildren, Kaeden, Karsen and Kalie Carey; step grandson, Kory (Tara) Koch and children Hunter, Owen and Lucas; sister Joan Carey Marshall and her three children, Kerri (Andrew Murray) Marshall, Dan (Aieta) Marshall, Matt (Sarah) Marshall; brother and sister-in laws Jim Curry, Wayne (Oxana) Curry, Candy (Bill) Loehding, Colleen (Les) Parks, BoBo (Lanelle) Curry, April (Joe) Potter, Dunie Curry Solander, Erwin Curry and all their children.