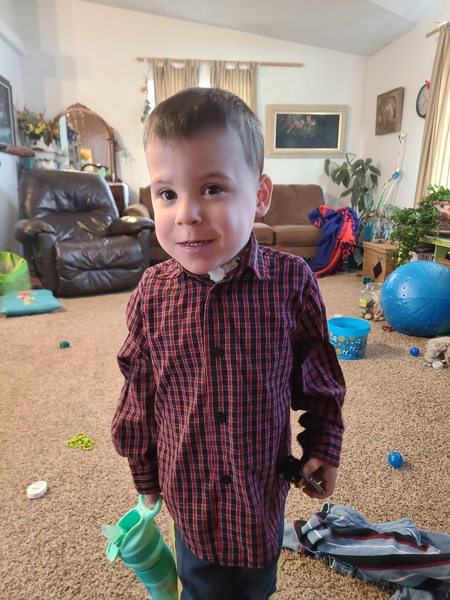 Joseph Larry LaCroix, sweet son of Jacob and Rebekah, twin brother to Michael and big brother to Samuel, unexpectedly passed from this life to the beauty of heaven. He was pronounced brain dead on July 7, 2021 after being found unresponsive by his family on the morning of July 4 in Billings, Montana. Despite successfully and safely performing this maneuver many times, Joseph inadvertently removed his tracheostomy tube when attempting to disconnect it from the ventilator he used nightly.

Following Joseph’s death, his parents chose to donate his organs giving the gift of life to so many across the nation.

Joseph and his big brother Michael (by 9 whole minutes) blasted their way unexpectedly into the world at Holy Rosary Hospital in Miles City, Montana after only 26 weeks of gestation. Each weighing only 2 lbs. 4 oz., Joseph and Michael were both airlifted to St. Vincent’s Hospital in Billings and then transferred four weeks later to Children’s Hospital in Colorado. All told, Joseph spent 563 days in medical facilities where he faced and overcame a myriad of daunting conditions including lung disease, high blood pressure, and oral aversion. While most parents take their babies home from the hospital a few days following their birth, Joseph’s parents waited over 18 months until November 29, 2018 to finally bring home this bundle of joy, sunshine and tenacity. So many dedicated, compassionate, excellent medical professionals contributed to his survival and growth. Unseen hundreds, maybe thousands, prayed for Joseph over the years. His incredible journey had many miraculous moments witnessed by his parents and their families.

While Joseph’s short life of 4 years and almost two months was undeniably filled with medical challenges, Joseph was so much more than the challenges he faced due to being born premature. He was, in so many ways, a typical, delightful little boy who always wanted ice cream and raided the cheese stash whenever he got the chance. Joseph loved cars and was quick to run to the toy section to pick out a new Hot Wheel. He adored interactive books like Do Crocs Kiss? and The Crayons’ Book of Colors. Joseph and his brothers enjoyed watching “Little Bear,” and Joseph could often be heard singing “Five Little Ducks," Teddy Bear,” and “Roly Poly” throughout the day.

Joseph was a bit of a trickster, hiding from his teachers just how smart he was. At school he wouldn’t count or trace when asked to, but would go home and do the tasks perfectly.

Even though Joseph was a twin and had a built-in buddy with Michael, he also had a special relationship with his little brother Sam, who he was always taking care of. Joseph spent hours snuggled up with his mom reading books and loved wrestling around with his dad.

Joseph was preceded in death by his infant cousin Emmett LaCroix.

Joseph’s celebration of life will be held in Baker, Montana on Saturday, July 17 at the Baker Assembly of God Church at 10:30 a.m. with lunch to follow at the Lakeview Baptist Church multi-purpose room. The family requests that those attending wear Joseph’s favorite color, yellow, or any other bright color because he loved them.

In lieu of flowers, the family requests donors consider sponsoring one or more Tiny Super Heroes Capes for children with special needs. https://tinysuperheroes-shop.myshopify.com/products/sponsor-a-cape
To order memorial trees or send flowers to the family in memory of Joseph LaCroix, please visit our flower store.