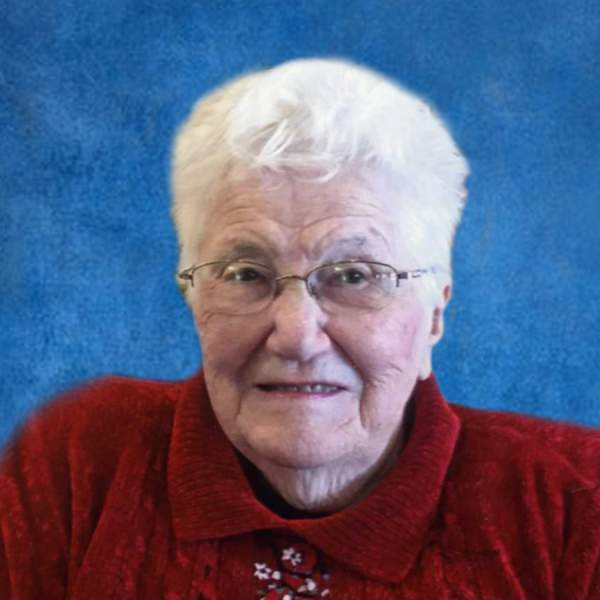 The oldest of three children, Joyce was born on June 6, 1926 to Peter and Elizabeth (Stecher) Mellmer. She, like her two brothers, was born on the farm eleven miles east of New England, North Dakota. Since Doc Hill, the rural baby doctor from Regent delivered her, she always called herself a “Doc Hill” baby. For three years, Joyce attended the Mellmer – Helleckson Country School. Joyce then attended New England St. Mary’s Catholic School. She stayed with her German speaking Grandmother Elizabeth Mellmer when attending High School. This is where Joyce learned how to speak fluent German. After graduating as Valedictorian at St. Mary’s in 1944, Joyce worked at the Citizen’s Bank in New England. In 1945, she married Andrew Rettinger. To this union, twelve children were born. Doctor Gumper at St. Joe’s Hospital delivered all twelve. All twelve attended college.

Joyce enjoyed music and was a talented musician, playing several instruments. As a teenager, she played in the school band, the community band directed by Phillip Lamprecht and Mr. Nick Koppinger, and their own family band which was called the M&M Band for the Mellmers and the Madlers. The M&M Band played for many dances and other events in the surrounding communities. A highlight for Joyce was to perform at the Capitol and to perform in the parade at North Dakota’s 50th anniversary, 80 years ago.

A farm girl most of her life, Joyce was always hard working, dependable and supportive. She said the Depression taught her many things. She was a true woman farmer being able to do anything that any farmer would do on a farm. After leaving the farm, Joyce moved to Glen Ullin to be near her daughter Linda Duppong. Glen Ullin was her second home. Her last four years were spent in Albuquerque, NM.

Most precious to Joyce were the times spent with family and God. In Glen Ullin, she was a Lioness, in a Bowling League, Pinnacle Club, Welcoming Committee, CCD teacher, Art Association, Women of Sacred Heart, Morning Coffee groups, and many others. She travelled extensively in the United States and other countries.

She is preceded in death by her parents; brother, Peter Mellmer Jr.; sisters-in-law, Viola and Nancy; one son-in-law; Keith Johnson; and several grandbabies & great-grandbabies. A Requiem Mass and Rosary were held in Albuquerque.

In lieu of flowers, her family suggests donations to be made to the St. Mary’s Cemetery fund.
To order memorial trees or send flowers to the family in memory of Joyce Rettinger, please visit our flower store.