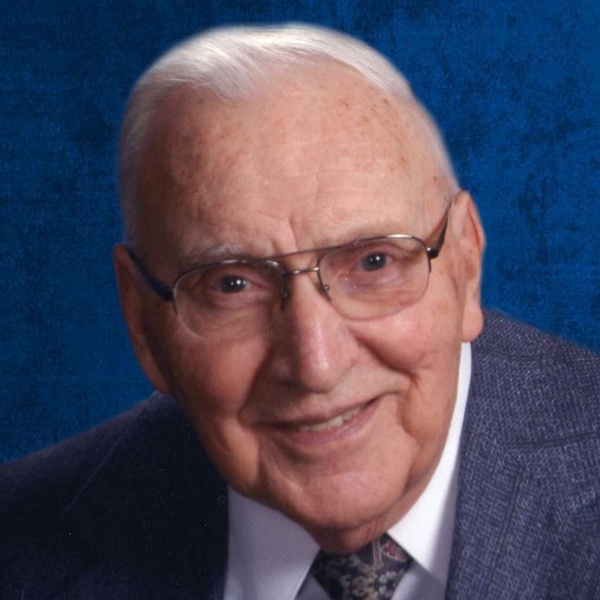 Visitation will take place one hour prior to the service at the church.

Kenneth Norman Hoistad passed away at his home Friday morning, Nov. 29.  Ken was born in Devils Lake, ND, on Nov. 7, 1925, to Oscar and Bertha (Haas) Hoistad.  He attended school in the Devils Lake area.

In December 1943, he joined the Navy, serving on the USS Kwajalein in the Pacific.  He was honorably discharged in May 1946.  He first worked at J.C. Penney for a year in Devils Lake before beginning a 40-year career at Otter Tail Power Company.  He started as an accountant in the power plant, then moving to its district office in Devils Lake.  In February 1957 he transferred to the General Office in Fergus Falls, MN, and retired there as a supervisor of Production Administration in December of 1987.

He married Florence Birkeland on June 20, 1948, in Devils Lake.  They have two daughters, Vicki and Sheree.  Ken enjoyed his daily afternoon coffee six days a week with a group of male friends, rarely missing a day!  He also loved fishing at their cottage on Swan Lake outside of Fergus Falls.  Ken was a kind and patient man, even during his illness with Alzheimer’s.  Before his illness, he could fix almost anything and was always willing to help anyone.

In 2011 Ken and Florence moved to Dickinson to be closer to their daughter, Sheree.  Ken is survived by Florence, his wife of 71 years; his daughter Vicki Lee (Don) of Lahaina, Maui; his daughter Sheree (special friend Bill Heth) of Dickinson; and a sister Donna (Merwyn) Colson of La Palma, California.  He was preceded in death by his parents, two sisters, and two brothers.
To order memorial trees or send flowers to the family in memory of Kenneth Hoistad, please visit our flower store.