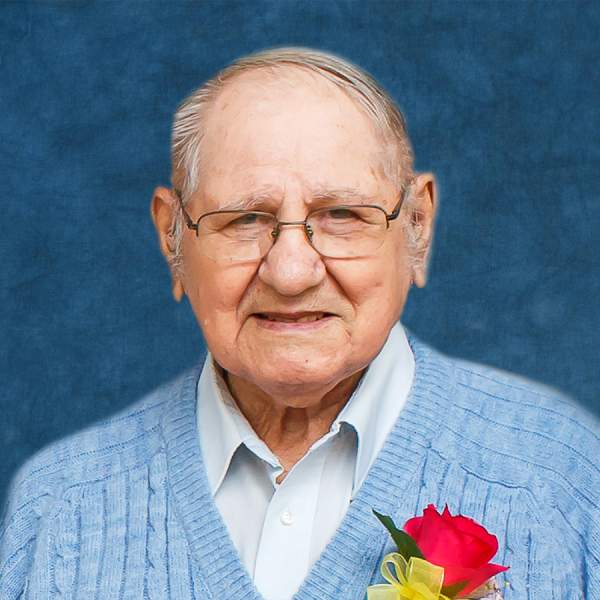 In light of the Coronavirus restrictions, Laudie’s Funeral Mass will be limited to immediate family. Laudie would want his friends and family to be safe during this time. . To view the live-stream of Laudie's Funeral Mass, please go to the St. Patrick’s Catholic Church Facebook page at 10:00 a.m., Wednesday, April 29, 2020.

Laudie Kostelecky passed away Monday, April 13, 2020 at Hilltop Home of Comfort in Killdeer.

Laudie Albert was born on July 28, 1926 in rural Dunn County, the son of Steve and Agnes (Urbanec) Kostelecky. As a young boy, he grew up on a farm north of Dickinson. He attended New Hradec School through the eighth grade. At the age of 18, Laudie became a soldier in the US Army and was later discharged to return home to help out on the family farm. On October 15, 1947, Laudie married Edith Kralicek and they lived on the family farm for a short time before moving into Dickinson. Their marriage was blessed with son, Harlan and daughter, Jamie. Laudie worked as a mail carrier for over thirty years. Following his retirement, he drove vans transporting railroad crews to and from the depo. In 2016, Laudie became a resident at Benedict Court, later moving into St. Benedict’s Health Center in 2018. His final home since 2019 was Hill Top Home of Comfort in Killdeer. Laudie enjoyed gardening, spending time at the lake, fishing, grilling and sitting on his back deck outside. He especially loved spending time with his grandkids and great-grandkids, never missing any of their sporting events. Laudie was a member of the Eagles, Knights of Columbus and St. Patrick’s Catholic Church.

He was preceded in death by his parents, Steve and Agnes; wife, Edith (2005); son, Harlan; grandson Sean; sister, Lillian; many brother and sister in-laws.
To order memorial trees or send flowers to the family in memory of Laudie Kostelecky, please visit our flower store.