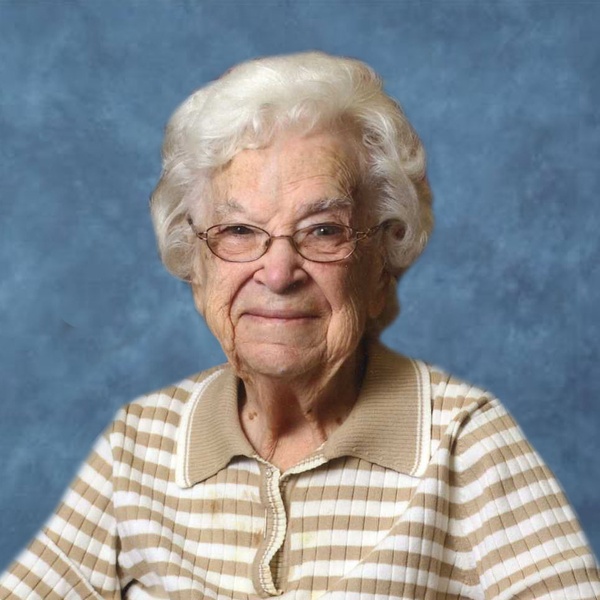 A Liturgy of the Word for Lena Naumann, 100, of Dickinson formerly of Lefor/Taylor will be 1:00 p.m., Monday, November 11, 2019 at Stevenson Funeral Home with Deacon Bob Stockert celebrating. Everyone is welcome to a meal before the service starting at 11:00 a.m. at the funeral home.  Burial will follow at St. Thomas Catholic Cemetery in Gladstone.

Lena Kirschenheiter was born February 26, 1919, on a farm near Taylor, North Dakota, the daughter of George and Eva (Berguesh) Kirschenheiter.  She grew up on the farm, attending Aurora School District #31. On February 12, 1939, Lena was united in marriage to Henry Naumann in Billings, Montana.  To this union three sons were born; Herman, Kenneth and Ted. While living in Montana, Lena worked as a grocery clerk.  A few years later they returned to their farm and ranch near Taylor.  After semi-retiring in 1971, the couple moved into Dickinson.

She is preceded in death by her parents, George and Eva; husband, Henry; sons, Ken and Herman; brothers, Bernard and Joe Kirschenheiter; infant sister; and 4 grandchildren.

In lieu of flowers, memorials can be made to St. Benedicts Health Center in Dickinson.
To order memorial trees or send flowers to the family in memory of Lena Naumann, please visit our flower store.