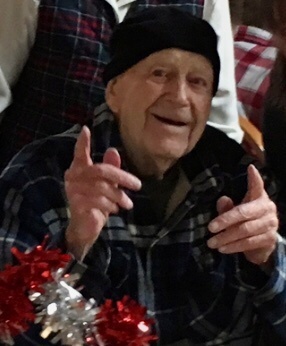 Visitation will take place one hour prior to the service on Thursday.

Loren William “Bill” Heistand, age 106, passed away on March 25, 2021 at the Billings Clinic Broadwater nursing home in Townsend, Montana. He was born on September 22, 1914 in Alma, Illinois, to Elmer and Blanche (Nichols) Heistand. He lived in Illinois as a young boy. Bill had one sister and five half-brothers. He moved to Billings, Montana with his mother and sister in 1925 and lived on a farm in the Heights.

Bill was drafted into the US Army in 1942. He served in Europe during WWII and was honorably discharged in 1945. He returned to Billings to work on the farm where he gardened, raised chickens and sold eggs to customers in Billings.

After selling their farm, Bill and his mother traveled extensively throughout the United States by automobile. They enjoyed spending time together while viewing flowers, wildlife and scenery. In 1966 they settled in Baker, Montana where his sister Rhea “Peggy” Bruce and her family lived. Bill helped out on the Bruce Ranch and gardened extensively. He lived independently until age 99. Bill was cared for at Superior Care Villa in Baker until November, 2018 when he decided to move to Helena to be closer to family. Since September, 2019, he has resided at the Broadwater Health Care in Townsend. He enjoyed frequent visits from family and friends. The staff became his in-person “family” during the COVID-19 pandemic quarantine.

Bill always appreciated the opportunity to celebrate another birthday with family and many friends; and of course good food and unlimited ice cream. His 106th birthday party was limited to a few relatives and friends due to the pandemic restrictions, but he still got his ice cream.

Uncle Bill took great pride in his good health. He attributed it to his lifestyle of eating wholesome food, staying active, getting plenty rest, having a positive outlook and always going to sleep with a smile on his face. His vegetable garden and grain crop contributed to his source of food. Bill ground his own grain, loved potatoes, chicken, corn on the cob and ice cream. He always said, “I am a working model for how to have good health”. Bill had a strong belief and read his Bible often.

Bill was preceded in death by his parents and his sister.