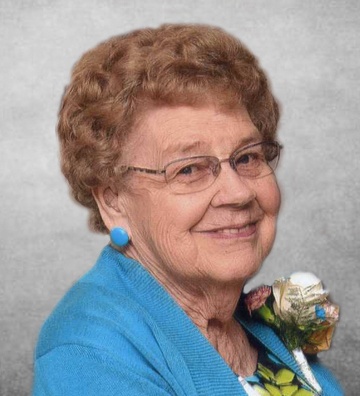 Private services will be held for Loretta Wyckoff, 87, of Beach, at Stevenson Funeral Home in Dickinson with Pastor Warren Maxted officiating. Burial will follow at the ND Veteran’s Cemetery in Mandan.

Loretta passed away January 12, 2021 at CHI St. Alexius in Dickinson.

Loretta was born May 13, 1933 to Leroy and Orphana Jane (Johnston) Wymore. She was raised north of Wibaux in the Been area where she attended the Been school and graduated from Wibaux County High School in 1952. She met Kenneth Wyckoff in Wibaux and the two were married March 6, 1953. To this union there were three children: Marlys, Alvin, and Mary. Loretta and Kenneth moved to Medora where they raised their family. In Medora, Kenneth worked for the National Park Service and they owned and operated the Exxon station. In 1983 they moved to Beach. After Kenneth passed in 1995, she remained active in the Beach community until she moved into the Golden Valley Manor in August of 2014. She was active with the Senior Citizen Center, Golden Valley Manor, and the Beach Evangelical Church. She was a very loving and caring mother, grandmother, and great-grandmother.

In lieu of flowers, memorials may be made to the Golden Valley Manor.
To order memorial trees or send flowers to the family in memory of Loretta Wyckoff, please visit our flower store.