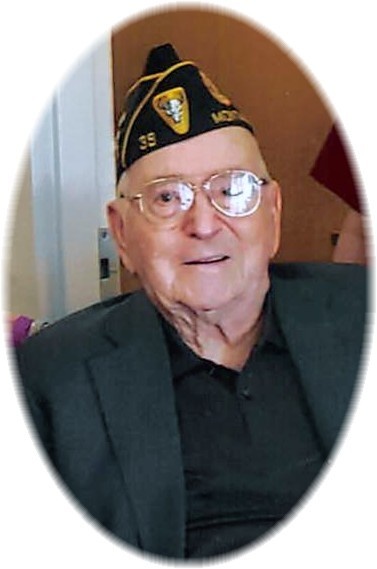 Marion was born on March 28, 1925 in Red Elm, South Dakota to Anson Wilbur and Clara Marie Kowalewski Callen. Marion went to school in Glenham, South Dakota. He graduated in 1942 from Glenham High school and was valedictorian of his class. After graduating high school at 17, Marion joined the Army in 1944 and fought in WWII as an Aide to General Patton, Army Infantryman from 1944-1946 also was in the European Campaign/Normandy. After receiving his training in Alabama, he was shipped to New York and from there to France. He served in Italy, France, Germany, and England. Marion’s canteen took a bullet for him during a battle. He received 3 purple hearts, bronze star, silver star, Victory Medal, European-African-Middle Eastern Theater Ribbon with one Bronze Star, two overseas bars, Army of Occupation Medal, and German/Good Conduct Medal/Combat Infantryman Badge.

After the Army, Marion and his family moved to Baker, Montana. He met Ruby Maxine North and they were married on November 6, 1948. To this union they had four children: Jerry, Ron, Anson Victor, and Mariann. Marion started working at the Baker Hotel for a couple years then started work at the L. Price Company in Baker for 21 years. After retiring from the L. Price Company, Marion and Ruby managed the Sagebrush Inn in 1980. In 1983 Marion and Ruby moved to Forsyth and managed the Westwind Motel and retired 1995 and moved back home to Baker. In 1996, when Ruby passed away, Marion moved back to Forsyth.

Marion met Ethel Winkley in Forsyth, they later married on January 8, 2021 through the glass at the VA Community Living Center because of Covid-19.

Marion was a Schwinn Bike man, Bike Collector, and had multiple Bicycles built for two. He had roller skating rinks, was known as the “Candy Man”, and one of his passions was goose hunting. He wrote a book called WWII Tales which was a collection of all the articles he had written for the weekly article section for the Independent Press. Marion had many hobbies, one hobby he enjoyed doing was putting puzzles together, but most of all he loved his family and always kept his faith. He loved watching all of his grandkids play sports, you could always find him in the stands cheering them on.

Marion was a lifetime member of the American Legion, Post 35 of Baker, participant of Forsyth Honor Guard and Forsyth Post 39 American Legion. In 2012, Marion went on the Big Sky Honor Flight to Washington, DC. He loved his country and was a proud veteran.

In Lieu of flowers, a donation can be made to the VA Community Living Center in Miles City or the First Baptist Church of Forsyth.

A funeral Service will be held on Saturday, August 7, 2021 at 10:00 AM at the First Baptist Church in Forsyth. Following the funeral service a Graveside Service with full Military Honors will be held at 3:00 PM at the Bonneville Cemetery in Baker.
To order memorial trees or send flowers to the family in memory of Marion J. "Dakota" Callen, please visit our flower store.