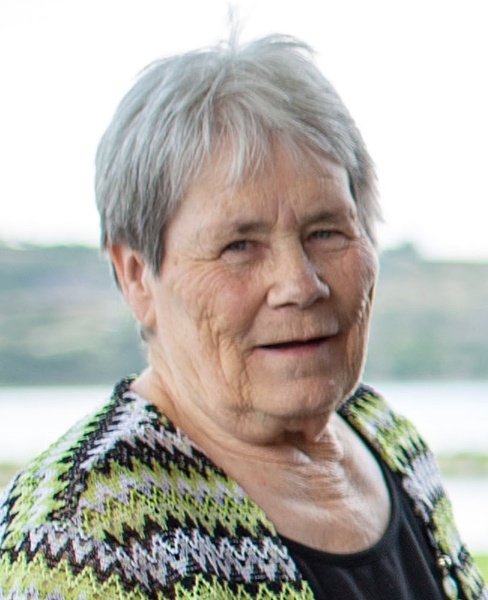 Funeral service for Marjorie Peterson, 79, of Baker, will be at 1:00 p.m., Monday, November 15, 2021 at Stevenson Funeral Home in Baker, MT. Visitation will take place one hour prior to the service.

For those unable to attend, this service will be live streamed at stevensonfuneralhome.com.

Marjorie passed away October 24, 2021 at Fallon Medical Complex in Baker.

Marjorie Jean was born November 13, 1941 in Sturgis, SD the daughter of Thomas ‘Chip’ and Regina (Gerber) Blair. One of three children. She returned home to Ekalaka, MT, where her family made their home until her late elementary years. The family then moved to Sturgis, SD. It was in Sturgis that Marj completed her education and graduated from Brown High School in 1960. While in school, Marj was active in numerous extracurricular activities. Among which was basketball, mounted drill team and rodeo, lifelong loves, later in life playing softball, and with her husband Richard, supplying timed event stock for rodeos. She was a two time SD state high school breakaway champion, earning the All-around championship title in 1959, she was awarded a saddle and a mare colt she named Peggy, whom she had for many years.

On December 16, 1962 Marj married Richard Peterson from Philip, SD. To this union, three children were born, Phyllis, and the twins, Tracy and Troy. During the early years of their marriage, they lived at the Peterson family ranch near Philip, SD, and were partners in a well drilling business. When Phyllis was a baby, the family moved to Wanblee, SD, where they purchased a ranch. This is where they raised their family. After Richard passed away in 2002, Marj moved into town for a brief time before moving to Baker, MT in 2007 to be closer to family.

Marj was known to care for many animals, including a pet deer and raccoon and an orphan pig. As her grandchildren grew, she could be found at many different sporting events, ranging from wrestling, to football, basketball and track. Most recently she loved watching her great grandson compete in wrestling and soccer, while excitedly anticipating the younger ones starting sports when old enough. You would find her sitting in the grandstand at many basketball games, simultaneously wearing headphones to hear the radio broadcast of the game she was attending… so that she didn’t miss a thing!

Marj was a skillful seamstress, making clothes for her family for many years. At one time she also made clothes for porcelain dolls. While in Baker, Marj had a busy mending business. If you had mending to drop off at Marjs’ you better plan to stay for a bit. There was always a pot of coffee, Gunsmoke was on, and be prepared to talk a little politics. Marj was active in the Senior Center, and looked forward to the weekly card games. Marj was an avid card player. She believed cards could be used as a teaching tool. She will be remembered for introducing many young people to a game over the years. Marj didn’t throw the game to let others win, even for grandchildren. If you beat her it was a victory to be celebrated.