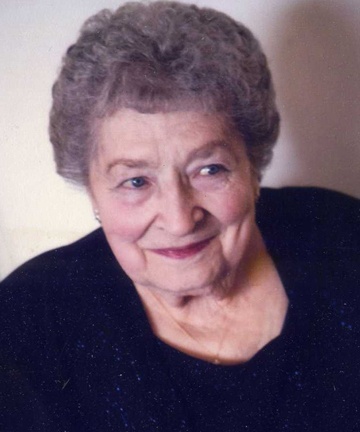 Mary's Mass of Christian Burial will be at 10:00 a.m., Tuesday July 13, 2021 at Queen of Peace Catholic Church, Dickinson, with Rev. Father Kregg Hochhalter as the celebrant. Internment will take place at St. Patrick's Cemetery, Dickinson ND.

She moved to Fessenden ND, as a small child where she attended elementary through high school. Mary attended the Wahpeton State School of Science and met Dale Jurgenson while attending college. After graduation, both Dale and Mary took jobs in Bismarck where Mary worked for the State Highway Department.

Dale and Mary were married at St. Augustine's Catholic Church in Fessenden on May 1, 1948. After the wedding, Mary and Dale moved to Dickinson to raise their family and make their home.

After retirement, Mary and Dale enjoyed traveling and spending winters in Mesa, AZ near family and friends. The summers were spent in Dickinson and at their lake cabin on Lake Sakakawea, which continues to be a gathering point for the family. Mary also gained a bit of fame later in life after calling into her granddaughter’s radio show weekly to share recipes. She was their most popular guest and sales of her cookbooks went to charity.

Mary enjoyed gardening, cooking, baking, collecting recipes, playing cards and watching Minnesota Twins baseball. In 1953, she was a charter member of the Homemakers Club and remained very active in the group. She was a wonderful mother and the perfect grandmother.

Mary was preceded in death by her parents; her husband, Dale Jurgenson, who passed away on November 16, 1998; sister, Edna Rask, brother, Perry Remillard and brothers-in-law, Melvin Rask and Gerald “Bud” Sobolik; sister-in-law, Shirley “Scotty” Remillard; multiple nieces and nephews.
To order memorial trees or send flowers to the family in memory of Mary Jurgenson, please visit our flower store.