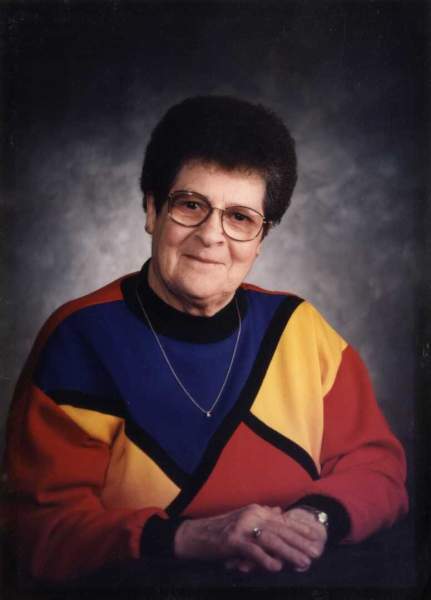 Funeral Mass for Mathilda “Tillie” Nelson, 99, of Dickinson, will be 11:00 a.m., Tuesday, August 11, 2020 at St. Patrick’s Catholic Church with Father Christian Smith celebrating. A rosary will be led at 10:30 a.m., prior to the funeral service. Private burial will be Wednesday, August 12th at the North Dakota Veterans Cemetery, Mandan.

For those attending, please adhere to the Covid-19 social distancing guidelines as recommended by the Department of Health.

Mathilda was born near Scheffield, ND, on June 14, 1921, the daughter of Marcus and Monica (Olheiser) Emmil. Growing up she attended school through the sixth grade in Scheffield. Tillie moved to Washington state during the war, where she worked in a factory and a café until the end of the war. Following her return home, she met Carl O. Nelson who became her husband on January 20, 1947 in Wibaux, MT. Their marriage was blessed with five sons and a daughter. Tillie and Carl resided in Dickinson until their move to Denver and Kansas City in 1948 where Carl attended school for watchmaking and gemology. They returned to Dickinson in 1952 and Carl opened and operated Nelson Jewelry for 41 years until his death in 2001.

Tillie was fussy about her home, inside and out. She enjoyed preparing her famous German dishes including Borscht, Cheese buttons, Knoephla, Paprikash and Sauerkraut. She enjoyed treating her whole family to “China Doll,” the Chinese Restaurant, where they always greeted her by name.

She was famous for babysitting for several families in Dickinson and she kept in touch with the kids through the years. But her priority was watching her grandkids grow up, especially in their backyard swimming pool “showing off” on the diving board and the slide. She really enjoyed keeping in touch with her nieces & nephews, brothers & sisters, as well as neighbors.

The many family dogs were her “fur”ever buddies and she fed them just like family. But, the special family pet was Chipper, the squirrel monkey.

We will miss you, Gramma, especially your sense of humor and the smile that went with it. We know you’re watching over us and you’ll always be in our hearts.