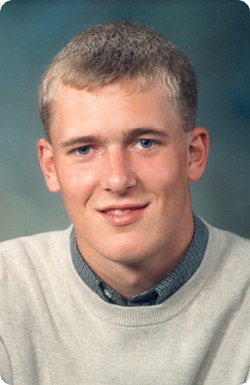 Michael Kenneth Boehm, 24, Fargo, formerly of Dickinson, died Thursday, July 28, 2005, at his home in Fargo. Funeral services will be 2 p.m., Tuesday, August 2, 2005 at St. John Evangelical Lutheran Church, Dickinson, with Rev. Steve Tangen officiating. Interment will be in St. Wenceslaus Cemetery, Dickinson. Visitation will be 9 a.m. to noon Tuesday at Price-Murphy Funeral Home and will continue at the church one hour prior to the service. Michael Kenneth Boehm was born June 9, 1981 in Bismarck to Dawn Kallestad and Terry Boehm. Michael lived with his parents in Fargo for a year and then in Hazen until he was six years old. He then moved with his family to Dickinson where he grew up and called home. Michael attended Jefferson Elementary School, Hagen Jr. High, and Dickinson High School, graduating with honors in 2000. Michael loved sports and the outdoors. At a young age, he began hitting home runs and catching long passes. At age 6, he began hockey, which became the center of his life. He became a goalie around age 10 and still played and coached. His memories of being a goalie and his equipment will be forever cherished. His senior year was his most memorable because of the foreign exchange students and the first and only trip to the State Hockey Tournament at the new Ralph Engelstad Arena in Grand Forks. Michael was active and involved in so many things and enjoyed being with people. He developed many long lasting friendships that still linger today. He was involved with student council, hockey, basketball, track, baseball and golf in Junior High. He was a team captain his senior year in hockey. Michael attended NDSU in Fargo. While at NDSU, he was president of Sigma Alpha Epsilon (SAE), a Bison Ambassador for NDSU, and involved in NDSU Student Government. He played club hockey, and recently went to Hazen to help coach a goalie camp, and was just hired to coach goalies in Fargo. Michael worked many places, but his most memorable are while at Wendy?s, Sears, Kadrmas, Lee & Jackson, PC, and most recently at Scheels. Michael enjoyed many trips with family and friends, including two times to Cancun, many times to California, Arizona, Florida and many others. He would not hesitate making a trip somewhere with family, friends, or for an organization he was involved in. He was always doing something for or with someone. Michael loved to travel, golf, play tennis, racquetball, softball, snow ski, kneeboard and jet ski. He absolutely enjoyed being at the lake and on or in the water. He has provided us with so many memories while being at the lake, and always brought friends along. Michael also shared a wonderful curiosity for life and exploring new places. Michael is survived by: his parents; a sister Lisa; grandparents, Lorraine Boehm and Kenneth and Donna Kallestad; an uncle, DuWayne (Donna) Boehm; aunts LaRae (Duane) Helbling, Lynnette Boehm, LaShalle (Kary) Leingang and Debbie (Dan) Braaten, and 15 cousins. Michael was preceded in death by: his grandfather, Michael Jerome Boehm. Pallbearers are some of his many friends, Lance Rustan, Curtis Kilber, Craig Kilber, Nate Speidel, Shawn Heilman, and Andrew Kristensen. Memorials are requested to be given to: the Dickinson Hockey Club, 1865 Empire Rd., Dickinson, ND 58601 for goalie equipment; the Multiple Sclerosis Society, Dakota Chapter, 1351 Page Dr., Suite 103B., Fargo, ND 58103, since Michael had a special interest in and actively fundraised for MS; Arizona State University Foundation, Attn: Gretchen Buhlig, 300 E. University Dr., PO Box 2260, Tempe, AZ 85280-2260; NDSU Development Foundation, PO Box 5144, Fargo, ND 58105.