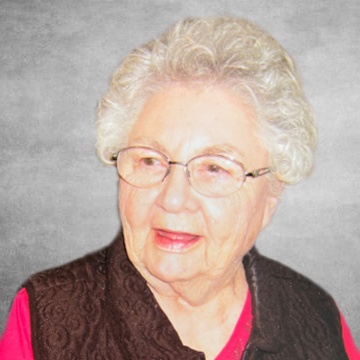 Visitation will be one hour prior to the service at the church.

Orpha Hartmann, 89, passed away at CHI St. Alexius on March 10th after a brief illness.

She was born at home on February 26, 1932 to John and DeLily Rothfusz. She attended a country grade school and then had to live with family friends to attend Ashley High School. Part of her room and board was paid with her share of WWII ration stamps. After graduation she moved to Bismarck, working in the state health lab as a receptionist. Her dream was to become a nurse and she often spoke of dealing with different specimens from diphtheria to polio.

She married Henry P. Hartmann (Hank) in 1957 and moved to the family farm near Hebron. She and Hank made many changes to their farm, foremost being the change to a grade A dairy farm. They were one of the first dairy pipelines in the nation and honored for their efforts in soil conservation many times. She and Hank had 3 children. Hank was killed in a farm accident in 1966 and she remained on the farm until 1993 when Curtis returned to ND with his family. Orpha returned to Bismarck for a few years than moved to Fargo in 1995. She had just moved back to Bismarck in January of this year to be closer to family.

She returned to the work force in 1979, working first as a crop insurance adjustor and later moving into the role of auditor. Her love of the job and being respected for her skills meant a great deal to her and she continued working on an as needed basis until 2018.

Orpha loved a good game of cards, a big garden, cooking and baking, as well as any social gathering; large or small, especially if they were family gatherings.

Orpha requests memorials to St. John’s United Church of Christ or the charity of your choice.
To order memorial trees or send flowers to the family in memory of Orpha Hartmann, please visit our flower store.
Send a Sympathy Card