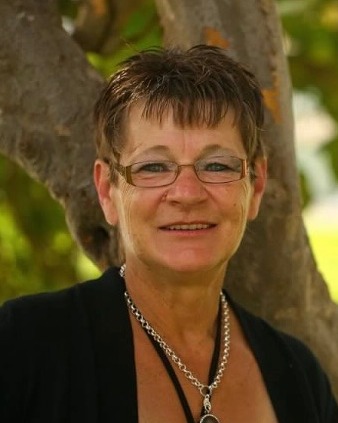 Patricia passed away on August 28, 2022 at Monument Health Hospital in Rapid City, SD.

Patricia “Patti” Frank was born November 12, 1955, in Dickinson, ND to Leroy and Eleanor (Schaff) Kilwein. Patti graduated from New England Saint Mary’s High School and moved to Helena, Oklahoma where she married Brad Fullerton on January 17, 1974.  Together they had two children, Jessica, and BJ.  Patti’s Oklahoma family has always been very near and dear to her heart and every summer a road trip was made south for a visit.  After Brad’s death in May of 1981, Patti returned to New England where she began working at the Golden West and was a staple behind the bar for many years. Patti married Don Frank on October 1, 1982, and together they had one daughter, Amy. Together Don and Patti raised their three kids south of New England where they farmed and ranched until Don’s death in July 2003.  Patti enjoyed visiting with friends and townspeople and was never bored because she couldn’t sit still for a minute.  Patti was known for all her hard work and willingness to jump in and help wherever needed.  Patti loved to cook and was known for her famous cheese buttons, homemade chicken & noodles, and pickled peas.  She never went to visit a grandchild without a plate of goodies and was always willing to make treats for any school event or bake sale.  Patti enjoyed gardening, bowling, and playing cards, specifically pinochle with her friends.  She cherished her many bowling trips to Deadwood and fishing trips to the lake as well as her beach vacations to Mexico.  Patti was always creating, making something crafty, or refinishing old furniture. She was the person we called on for any painting, cleaning, or mowing job.  Patti adored her grandchildren and loved to be around them. She supported them endlessly in all their activities and events.  Patti worked at New England High School for many years and loved being around her grandkids daily. She was known as “Grandma Patti” by every child on the playground!

In lieu of flowers we have set up a memorial account at Bravera Bank.