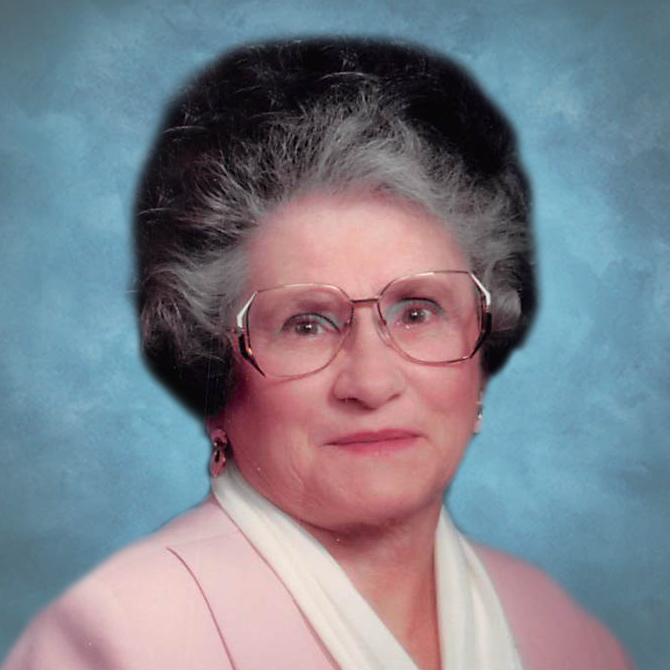 A funeral Mass for Pauline Kirsch, 93, of Dickinson, North Dakota, will be 2:00 p.m., Friday, November 30, 2018 at St. Thomas Catholic Church, Gladstone with Father Shane Campbell celebrating.  Burial will take place in St. Thomas Cemetery.  A reception for family and friends will be held after the burial at Stevenson Funeral Home, Dickinson.


Born to Peter and Elizabeth Lefor on May 27, 1925, Pauline grew up on a farm near Lefor, North Dakota, graduated from Gladstone High School in 1943, and began work at the JC Penney department store in Dickinson.  She taught school for one year, before marrying on June 5, 1944 her husband of 62 years, Donald, who passed away on November 13, 2006. Don and Pauline ranched and farmed for 60 years south of Gladstone.


Born in a sod house, Pauline was a woman of the land her entire life. While diminutive in physical stature, she was mighty in spirit and energy. Her high school nicknames were “tiny” and “dynamite!” A productive life meant working hard and being useful to others.  Her greatest joy was being outside, working in the soil of her flower and vegetable garden.  She had ten “green thumbs.”  Whatever she touched grew. Over the course of her lifetime, she gave away thousands of peppers, tomatoes, beans and cucumbers. Even in her last few months of life, she wanted to be outside with flowers.  This past summer she even helped dead-head the petunias at her care center. She left the world a better, more beautiful place.


Pauline had high expectations for her children.  She and Donald worked extremely hard to save money for their college educations.  While neither Pauline nor Donald could afford college, receiving the highest and best education possible was a core family value.


She was an excellent seamstress, making professional quality clothes for her family and for others. Pauline had a good business sense and was extremely well-organized.  Her organizational skills came in handy when maintaining for decades the registration certificates for the family’s purebred Hereford livestock, a business which Don’s father, Peter, began in 1930. For many years, Pauline was part of the KCettes in Gladstone and served on county election boards.  She was very active with St. Thomas Catholic Church. In her retirement years, she followed national politics quite closely.


She was preceded in death by her husband, her parents, and her five siblings: Eleanor Birgenheier, Anthony Lefor, Peter Lefor, Anna Schultz, and Elizabeth Sigl. She is survived by her two children, Judy and Rod, daughter-in-law Michele Kirsch, and granddaughters, Kelsey and Mackenzie.