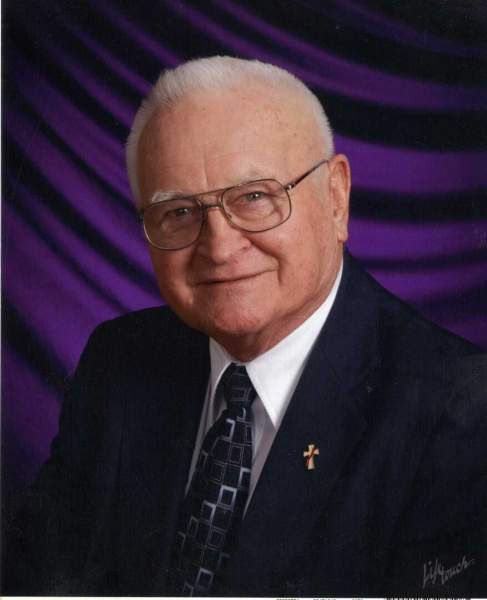 Due to the recent outbreak of the Coronavirus, public officials have strongly recommended to keep Ray’s funeral services to family and close friends. We ask that if anyone is not feeling well to please stay home. Ray would have wanted his friends to be in a safe environment during this time of uncertainty. His family understands and appreciates your thoughts and prayers.
Funeral Mass for Deacon Ray Jilek, 87, of Dickinson, will be at 9:30 a.m., Thursday, March 19, 2020 at St. Wenceslaus Catholic Church with Msgr. Patrick Schumacher celebrating. Burial will follow at the church cemetery.
Visitation for Ray will be 1:00-7:00 p.m., Wednesday, March 18th at Stevenson Funeral Home with a rosary and vigil being held at 6:00 p.m.
Ray passed away March 16, 2020 at St. Luke’s Home in Dickinson with his family at his side.
Raymond Robert was born in Stark County on February 15, 1933, the son of Joe and Hattie (Jablonsky) Jilek. As a young boy, he attended Versippi School and later took correspondence classes through NDSU and received his high school diploma. “With God’s blessing, he married the most wonderful girl in the world,” Kathryn Roshau, on November 5, 1952 at St. Joseph’s Catholic Church in Dickinson. Their marriage was blessed with five children: Wanda, Randy, Raymond, Joyce and Ryan. Together they raised their family east of Dickinson, developing their farm, ranch and feedlot for over 43 years. In 1995, they moved to town where Ray designed and built his last home, which is still the family home today. Ray began his development career in residential and commercial construction, which took him to three states. He was hired by the Dickinson Development Corporation (currently Stark Development Corporation), and began helping business start-ups for several years. Ray then ventured out to start Ray Jilek and Associates, through the early 1980’s, where he helped and consulted for businesses in state and internationally. Notably, his travels throughout Russia and Siberia as a consultant brought him to write a book titled “From Versippi to Moscow.” He was an active pillar in the state and Dickinson community, serving on numerous Co-ops, Rural Electrics, and church boards. In August of 1999, Ray completed a three-year study and was ordained a Catholic Deacon. He always stated, “I tried to give back to God for all His many blessings.” Ray inspired each of his children to start and own their own businesses. He was a pivotal role model and teacher for his family, always being there for them. Upon giving his children life and business advice, he sent them off with “a wink, a hug and a prayer.”
Ray is survived by his wife and lifetime partner of 67 years, Kathryn; sons, Randy (Elaine), Raymond (Laura), Ryan (Kelley); daughters, Wanda Ford, Joyce (Rick) Jilek-Donaldson; 24 grandchildren; 25 great-grandchildren.
He was preceded in death by his parents, Joe and Hattie Jilek; son-in-law, Michael D. Ford; and sister, Della (Victor) Kadrmas.
In lieu of flowers, contributions honoring Ray’s life can be made at one or more of the following: Trinity Catholic Schools, 810 Empire Road, Dickinson, ND 58601; St. Wenceslaus Catholic Church, 523 Third St. East, Dickinson, ND 58601; The Seminarian Fund through the Diocese of Bismarck at: Diocese of Bismarck, Attn: Vocations, 520 N. Washington St., Bismarck, ND 58501
To order memorial trees or send flowers to the family in memory of Ray Jilek, please visit our flower store.