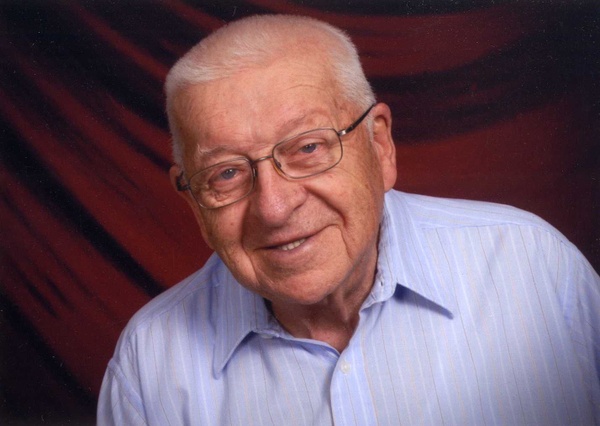 Richard J. Wehner was born April 6, 1927 to Peter and Elsie (Holz) Wehner at St. Joseph’s Hospital, Dickinson, ND. He grew up on a farm just North of Gladstone, ND. Richard attended a Country school NW of Gladstone. He started school knowing only German, so had to learn English as well as his other subjects there. Richard was drafted into the U.S. Army in July of 1945 at Ft. Snelling, MN. He took basic training and engineer training at Ft. Lewis, WA, then was stationed in Camp Morro Bay, CA in the 562nd Boat Maintenance Battalion. He was discharged from Ft. Ord in Dec. 1946. He then attended the Allied School of Mechanical Trades in Chicago, IL during 1947. He came home, and began his lifelong career at Mann’s Automotive Supply, Dickinson, ND on Jan. 15, 1948 as a machinist. He retired April 3, 1992 having been employed for 44 years, 2 months, and 3 weeks at the same job. He installed the very first air conditioner in a car in Dickinson before air conditioners were a standard in vehicles. Richard also did side jobs installing air conditioners in tractors and combines for many of the area farmers. He also became a projectionist for the Dickinson Theatre and the Hillcrest Drive-in for 11 years, along with his wife and son. (Karen just enjoyed the free movies!). Richard married Evelyn T Miller on Aug. 17, 1953 at St. Joseph’s Catholic Church, and to this union two children were born, Karen and Darryl. Richard was also a volunteer fireman for 20 years with the Dickinson Fire Department. He was a captain in the Fire Dept. and passed that love of firefighting on to Darryl and later to his grandson Brandon, currently employed with the Fargo Fire Dept. After retirement, Richard worked for a while for ServiceMaster. He also was a very active volunteer, working at (by his count) over 100 locations in Dickinson, some for just a day, some for many years. Among them were the Pioneer Machinery Building, wrapping gifts at the mall, taking fingerprints at the Sheriff’s Dept., the Prairie Outpost Park, St. Benedicts, and the Arc-Aid. He belonged to several clubs—the German Hungarian Club, the Eagles Club, RSVP as a volunteer for 27 years, the Sunset Senior Center, the Flickertail Carving Club of Bismarck, AARP (national and local), the Stark County Historical Society, and The Theodore Roosevelt Amateur Radio Club. He also started the Dickinson Woodcarver’s Club.

Richard was a very talented woodcarver and blessed his family with many of his carvings. His largest project was a bar scene that he did from a book put out by a National group of woodcarvers who had each done a piece or two. Dad did all of them! His sidekick Evelyn did the painting for his wood projects. He also made wonderful wood projects for his family—rocking horses, custom booster seats for the kids to use when eating, a cedar chest for a granddaughter, jewelry boxes, a grandfather clock, and many more items too numerous to mention here. He also bought a loom and taught himself to make rugs out of jeans.

He was a kind, patient man who was a wonderful teacher—he not only taught small engine mechanics a couple of years at Dickinson High School (he then could say he’d been to high school), but every Memorial Day was spent working on his vehicles, and that’s when he taught his children how to fix the engines also. We knew how to deal with oil changes, spark plugs, distributer caps, and everything else. He also taught at the Job Corps training center on Radar Base Hill.

He was a very well-read man, and proudly would tell us that he had never read a fiction novel. He loved books about airplanes, the war, and many other subjects. He would study maps and information about different locations, which helped not only his travels, but those of his children. We knew who to call when we were going somewhere, as he had the info!

Dad requested that upon his death we “use any organs that will do anyone some good. Had Triple bypass surgery, so heart may not be good to reuse. Other organs are good. Might be old, but low mileage.”

His grandchildren and great-grandchildren were thrilled by his ability to wiggle his ears for them. They also loved to mess up his hair.

The livestream for each service will be active 15 minutes before the service begins.
To order memorial trees or send flowers to the family in memory of Richard Wehner, please visit our flower store.