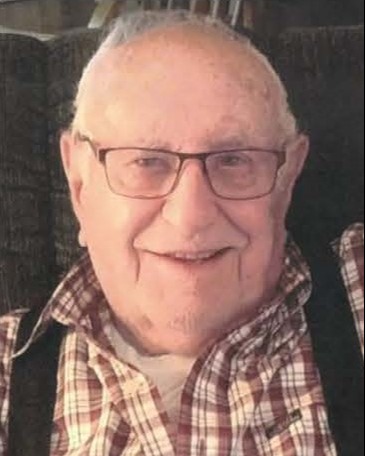 Graveside service for family and friends for Robert Allen Kramlich, 86, of Paynesville, MN, will be 1:00 p.m., Friday, September 16, 2022 at St. Patrick's Cemetery in Dickinson. Please join the family at Stevenson Funeral Home after the graveside for coffee and cookies.

Bob passed away March 12, 2022 at MorningStar Senior Living at Ridgegate in Lone Tree, CO, where he and Della had been residents since September 2020.

Bob was born on the family homestead in rural Power River County near Broadus, Montana, on May 17, 1935, the ninth child of Fred and Freda Kramlich. The Kramlich family moved into Broadus when Bob started school and he graduated from Powder River High School in 1953. During high school Bob worked on numerous area ranches. After high school, he worked for the State of Montana Water Conservation Board as a surveyor. In 1960 he became employed by an electrical engineering firm based out of Billings, MT, drafting and surveying power lines and substations.

He met Della Hanson at a country dance in 1957 and they married on July 2, 1960, at Sacred Heart Church in Miles City, MT. They danced through life together for the next 61 years. Bob became employed with the U.S. Forest Service in 1964 in Billings, MT, as a civil engineering technician, a position he held for over 30 years. During this time, they took a transfer to the National Grasslands in western North Dakota, making Dickinson their home for over 47 years and raising five children – Darcy, Kerry, Shanna, Karen, and Michelle. He felt the lure of the nearby Badlands, spending a great deal of time hunting and roaming this beautiful land over the years.

Upon retiring, Bob and Della enjoyed many travel adventures, and Bob spent countless hours at his workbench. His clocks, frames, trays, blanket chests, and unique wildlife boxes are treasured possessions of many family and friends. Bob and Della moved to MN in 2012 to enjoy proximity once again to family and grandchildren.

Bob is survived by his spouse of over 60 years, Della, and 4 children and spouses: Darcy & Larry DeWitt of Keller, TX;
Kerry and Colleen Kramlich of Littleton, CO; Shanna and Ken Jaeger of Lone Tree, CO; and Karen and Jeff Mogard of
Paynesville, MN; as well as his brother, Bill, of Great Falls, MT. His legacy of love lives on through his 16 cherished grandchildren, including several spouses and a great-grandson: Robert and Michael DeWitt, Sarah (Kevin) Greening, Evan (Cambria) Kramlich, Rachel (Nacho) Haley and baby Luca, Ryan (Lindsay) Kramlich, Jason, Landon, and Kelsey Kramlich; John, Naomi, and Christine Jaeger; Emma (Alex) Kunz, Rebecca (Charlie) Hopman, Anna, and Molly Mogard. He was preceded in death by his parents, daughter Michelle, and siblings: Mildred, Leota, Inez, Ramona, Leland, Alvin, and Margaret.

The family extends their deepest gratitude to the many caregivers and staff of MorningStar Ridgegate as well as to the nurses and staff from Lumicare Hospice for the love and care they so graciously gave.

Memorials in Bob's name can be made to the charity of your choice or to the Casa Bernabe Orphanage in Nicaragua casabernabe.org.

To order memorial trees or send flowers to the family in memory of Robert Allen Kramlich, please visit our flower store.