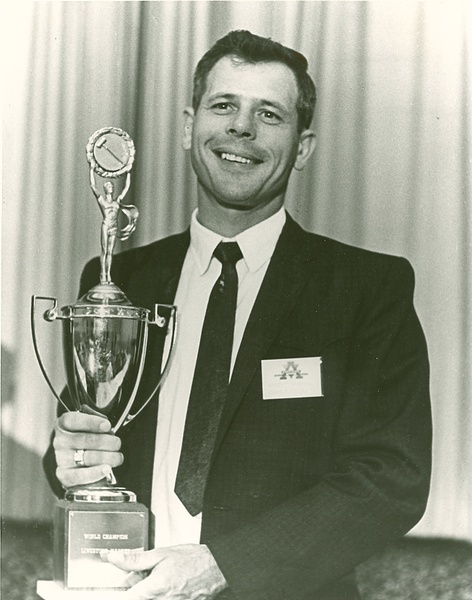 Robert Schnell was born November 17, 1930 in Dickinson, North Dakota to Ray and Clara Schnell. There were thirteen siblings in his large family, two of whom died as children. Robert attended St. Patrick’s Grade School and graduated from Dickinson High School in 1948. He graduated from North Dakota State University in 1952 with a Bachelor of Science Degree in Animal Science. Robert served as Student Body President there from 1951 to 1952. After graduation, he enlisted in the U.S. Army during the Korean War. His infantry training was at Camp Roberts, California. He eventually joined the Veterinary Corps serving as a meat inspector in Stockton, California. It was there that he met Joan Jackson. Joan was working a summer job between semesters at UCLA as a lifeguard at the Stockton public swimming pool and Robert was smitten! He spent many hours there and Robert often joked later about fighting the Korean War at the Stockton Swimming Pool.

Robert was honorably discharged from the army in 1955 and married Joan (Jackson) Schnell that same year in Stockton, California. Robert and Joan settled on the ranch north of Lemmon, South Dakota. Besides raising their four children there (Karen, Leigh Anne, Eric and Carter), they also raised registered and commercial Hereford cattle. In addition, together with several of his brothers and father, Robert was a partner in the Schnell Livestock Markets in Dickinson, North Dakota, Miles City, Montana and Lemmon, South Dakota. He started his auctioneering career in 1955 at the Dickinson Market and later honed his skills at the Miles City and Lemmon locations. He began his purebred livestock auctioneering business in 1956. That business grew to include cattle sales in 23 states and Canada. Robert also was selected to be the auctioneer at national breed auctions in Denver, Calgary and Regina. The highlight of his auctioneering career was in 1968 when he was named the World Champion Auctioneer.

After Joan and Robert’s divorce in 1974, they continued ranch operations together with the help of their son, Carter. Robert added a registered Angus herd in 1979 and registered Salers cattle imported from France and Canada in 1985. After he sold his half ownership of the Lemmon ranch to Carter, he moved to Rapid City and continued raising cattle on leased land near there from 1988 to 2005. He never stopped loving the Lemmon ranch and returned most summers to spray weeds for Joan and Carter. He hated certain weeds with a passion, leafy spurge and Canada thistle to name a few.

Robert was an avid outdoorsman and hiker. During the last fifteen years he spent in the Black Hills, he never missed an opportunity to explore them with his beloved companion, Phyllis Bergeron. Much of his time during his final years in Rapid City was spent reading. He had an extensive collection of books and shopping for a Christmas or birthday gift for him usually included the purchase of a new historical non-fiction book.

Worth noting are some of the offices held by Robert which include his positions as President of the American Salers Association in 1988 and President of the World Salers Federation in 1989. Robert was named to the Marketeers Hall of Fame in 1990. The ranch near Lemmon, which he was so proud of, was honored by being selected to host an American Society for Range Management annual tour. It also was the recipient of the 1969 Adams County Soil Conservation award.

Robert Daniel Schnell died on April 14, 2021 in Rapid City, South Dakota, at the age of 90. He is survived by his children, grandchildren, great grandchildren, two brothers, one sister and a host of nieces and nephews. A burial and Celebration of Life service will be held for Robert on Monday, July 12, 2021. The burial will be at 11:00 a.m. at St. Patrick’s Cemetery, 1375 10th Ave E, Dickinson, ND 58601. In lieu of flowers, please consider making a memorial donation to the North Dakota Cowboy Hall of Fame (www.northdakotacowboy.com).
To order memorial trees or send flowers to the family in memory of Robert Schnell, please visit our flower store.